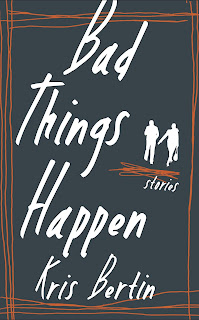 The Publisher Says: The characters in Bad Things Happen—professors, janitors, webcam models, small-time criminals—are between things. Between jobs and marriages, states of sobriety, joy and anguish; between who they are and who they want to be. Kris Bertin's unforgettable debut introduces us to people at the tenuous moment before everything in their lives changes, for better or worse.

My Review: This is a first collection for Canadian writer Bertin. It represents the fruits of seven years’ life-effort in ten stories. He was well-published in prestigious venues before this book was collected. Comme d’habitude, we’ll go story-by-story with my pearls of wisdom delivered thereunto, aka the Bryce Method:

Bad Things Happen can best be summed up by this quote, spoken by a mid-thirties studmuffin to a sixteen-year-old girl (Dee) with a crush on him:

Dee had broken into his house a short time before, with her instigator friend Tan, and seen what a Technicolor horror show he lived in. It began the process of disillusioning her about the starched, hunky guy her fantasies had centered on. Welcome to reality, kid. And the next bad thing that happens, well, let’s say it was absolutely no surprise but it was terrifying to any parent of a daughter. 5 stars

Make Your Move is a four-part choose your own adventure of different possible futures for a man with the grimmest past you can think of. He gets into his work limo, and then the fun begins, as the author travels the roads not taken. It’s amazing how much pain Bertin can pack into the one solid evening of driving the kind of people who rent limos around and about, to bars, to Wendy’s drive-through, to a snot-nosed kid’s house where his hot mom is worried about him. In the end it’s eight castles and a few fish. 4.5 stars

The Narrow Passage is a perfect movie outline. It’s the working life of Richard, soon to be a father, and Gene, a man whose maturity has been spent picking up garbage in a rural-to-village stretch of Canada. Does anybody remember the show The X Files and its scariest, weirdest episode, the one called “Home?” This story is a cross between it and the movie Deliverance. It kept me awake half a night, poor bastard Richard making a grim discovery:


He seemed to always have a dull headache that stayed with him so long everything seemed grey and strange, like he was in a dream. He felt empty and drained, like a shadow of himself cast on a wall. It was in this state, early in the morning, that he tipped over a steel drum with his work gloves and saw it:
Two beach towels, decorated with the California Raisins, soaked through with blood.
… The towels were balled up, and after he grabbed them, something fell out in the snow and landed with a thick kind of wetness. They were at {their worst pick-up}.
A girl’s nightie, green with lace trim, dark and wet.
The blood looked fresh and red and only a bit of it gone brown, because it was partially frozen. Not even in a bag, but tossed in overtop of one, almost casually. Like it was meant to be there.

The horrors of the rural Narrows of the story’s title are those endemic to any poverty-stricken area; but this particular stop, the lowlifes whose garbage heap Richard and Gene collect without comment or complaint per Gene’s worried instructions, is fast becoming the stuff of Richard’s nightmares. (Mine too. Maybe it comes with the name?) By the story’s end, we’re all ready for the storm to break and when it does, well, it’s just not what you would ever want to know happens in the civilized world. By far the best story in the collection. 5 stars

Girl on Fire Escape sizzles and pops with the energy of a twentysomething guy’s need for sex and connection in any way, shape, or form. Our screw-up of a narrator is working the dish pit in a big city restaurant at night, and washing windows of commercial buildings with a friend in the daytime. His friend is dating a young woman who works as a cam model, which distresses him but it’s a good living. Through this connection our narrator meets and fucks and then steals money with another cam model, a woman with a c-section scar and a very distinctive and beautiful tattoo on her chest. These two lost souls don’t so much connect as they fall into a mutual orbit around the center of gravity that is loneliness. By the end of the story, they’re either going to be Sailor and Lula or Rick and Ilsa. 4.5 stars

Is Alive and Can Move helped me understand my alcoholic roommate much better. It’s the inner monologue of a young-ish survivor of acute alcohol abuse that’s left him with alcohol-induced dementia. He hallucinates reality, an odd concept but one that keeps the story on the move. It’s heartbreaking to realize that, without strict adherence to a routine and a diet of real food and a regimen of medication, people in that stage of brain damage simply don’t function. Bertin, to his great credit, never loses sight of his character’s human dignity, and still tells the tale of the hallucinated reality the narrator lives in with unnerving candor. Doing so without either falling into preach mode or judgment mode is quite a feat. 4.5 stars

Crater Arms did not make one whit of sense to me. I read it three times and came away from each reading without a single clue what I was supposed to get from the experience, and what I actually got was bubkes. Like life. And so it goes. 3.5 stars

Everywhere Money couldn’t make me like the phone scammer narrating it, but I did come away with the idea that money meant less to him than accomplishing something, doing something that had a beginning, a middle, and an end. I’m like that as well, a task-oriented kind of being. But phone scammers are ambulatory shit-piles. We meet Tan, from “Bad Things Happen”, again in this story, and she’s as fucked up as anyone could wish her to be. Her criminal career is well-established, apparently, as she’s working at stealing numbers (slang for credit card and personal data to access the line of credit) from big ballers at a private club to her boyfriend’s sad little phone scammer gig. This world that Bertin’s busily creating for us isn’t one we’d like to live in ourselves, is it? Too much criminality. Too little compassion. But sadly very real. 4.5 stars

The Story Here sounds really familiar to me. A genuinely and frighteningly dysfunctional family has an impromptu family reunion at the narrator’s house. As the only daughter of the three children, the mother of two and wife of one suddenly has her despised serial monogamist/adulterer father on her couch, her typical sibling rival older brother arriving with his new fiancée for family approval, her former stepmother banging on the door demanding to see the cheating old coot who is leaving her, and to top it all off the forest around her house is being leveled and blasted for new development. No wonder she dreams of the end of the world:


I learned to think of the dream not as something that comes to me, but as something that I have. An organ that inflates when my head is on the pillow, fills up the chambers of my mind, and takes over the last hour before my alarm goes off.
In the dream, there’s no comet or atom bomb or alien invaders. No catalyst, just a mindset that we’re all in. It’s just the end and everyone knows it. The only thing that gives it away is how the other people are acting. Cars are clogging the streets, guys with huge crucifixes and torches and Bibles and robes are on the sidewalk, or even on my lawn, and everyone else is just going crazy, screaming or crying or pleading with the sky like something’s listening up there. A lot of people on their knees.

Stress, anxiety, depression...all of the above...middle aged crisis...the narrator isn’t the first or the last person to feel that the world is ending when it’s more likely that she’s just unmercifully bored, frustrated, and trapped. And by the end of the story, I felt that any one of these characters would happily gnaw a limb off to escape the traps they set off every time any of them opens their mouth for any reason except to eat. 5 stars

The Eviction Process features a gay couple, criminals both, in the process of shutting down and revamping their former weed-growing operation house. This necessitates getting the formerly necessary associates to get out of the house along with the grow-lights and so on. Things go smoothly, too smoothly, on their first attempt; then it all falls to hell around them. The older man of the couple has an autistic son who has, apparently, no connection to anyone or anything in reality, and whose function seems to be to buzz, scream, click...our narrator, the younger man, can’t get through the profound disconnect between the child and reality, and the older man has a habit of beating people up, including his lover. As the situation reaches crisis point, there is a disaster that makes emotions run hot and dangerous, but violence is averted by the simulacrum of lovingkindness that glues the two men together. 5 stars

Your #1 Killer reunites us with our dishwashing drifter turned phone scammer as he slinks home to his mom in order to go crazy, get thoroughly drunk, play childhood games and generally cocoon himself in his addictions until, at last, the world around him snaps into focus again. It only does so as he begins a new career: Killing things. Pests, gophers, hornets, skunks, all in less-than-usual ways. His mother, like all mothers, wants him to be happy; he is a sullen stinking mess, which doesn’t make anyone happy. As his recovery of self-esteem gathers momentum, it’s finally in his head that his mother is a real person, is the undeserving recipient of his unkindness and therefore must be treated right at last. It’s the most hopeful story in the collection. It’s a good feeling to see this self-absorbed twit pull his socks up and get on with life in a strange, but workable manner. 4.75 stars

I think that might be the description of Bertin’s rough world in toto: Strange, but workable. Life doesn’t look the same at the bottom of the heap. It’s still life. There’s another day for each of these folks, another chance to make a difference if only to themselves. This is a terrific collection of quality work. Kris Bertin, I salute you, and am awaiting what comes next with happy anticipation.
Posted by Richard at 6:30 AM