THE GRAVITY OF THE AFFAIR, a precursor novella to the sailpunk space operas of the Known Worlds series 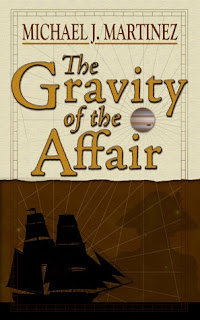 THE GRAVITY OF THE AFFAIR
MICHAEL J. MARTINEZ (The Daedalus Series #0.5)
Audible only
$5.95 or free with Audible sign-up

The Publisher Says: Before his victory at the Nile.

Before his scandalous personal life made headlines.

Before he crushed the French and Spanish fleets at Trafalgar.

Before he died a martyr.

Horatio Nelson, England's greatest naval hero, assumed his first command, the 12-gun brig HMS Badger, at the tender age of 20. History tells us his first voyages as captain were unremarkable. Yet in the Known Worlds, where sailing ships ply the Void and the mystic science of alchemy works wonders, Nelson's first command goes quite differently. With his brashness and emotions untempered by experience, Nelson's rash actions as captain of the Badger threaten his heroic destiny.

The Gravity of the Affair is a novella set in the Known Worlds of The Daedalus Incident, with events that tie into the novel (though both works may be enjoyed independently of one another).

My Review: I've already told y'all how much pleasure The Daedalus Incident (link above) gave me in reading. This charming side-novella gave me as much pleasure, really, just in a shorter and less fully realized way. Hence the slightly lower star rating.

An alchemically powered English space fleet, the rebellious colonists of the United States of Ganymede, Horatio Nelson's first command in jeopardy...we got it all in here, folks. The fun of reading about an Enlightenment England and its sprawl, only in space, can't be overstated. I loved the first exposure I had to the concept, and I'm not slowin' down on the luuuuv yet. Presenting Nelson as a 20-year-old in his first command was inspired of Mr. Martinez. Nelson's life-long impetuosity is very much in evidence here. Hewing very closely to the facts of Nelson's actual life gives a layer of amused discovery to reading the tale. Following Nelson around is even more fun when comparing the story here told to the fairly sketchy biography I carry in my head.

This sailpunk space opera series is great exercise for the imagination. Start here for FREE and see if the voyage is congenial to you. A little motion-sick disorientation is to be expected, and after all Admiral Nelson suffered from nasty mal-de-mer and HE won England's most important sea battle!
Posted by Richard at 1:42 PM