THE VISIBLE FILTH is a tale of evil, horrible consequences of uninformed mistakes made by normal people 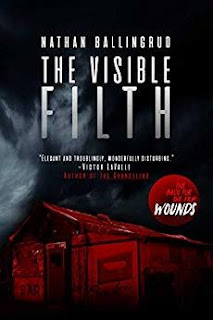 The Publisher Says: When Will discovers a cell phone after a violent brawl his life descends into a nightmare.

Affable, charismatic and a little shallow, he’s been skating across the surface of life in a state of carefully maintained contentment. He decides to keep the cell phone just until the owner returns and everything changes. Then the messages begin.

Will’s discovered something unspeakable and it’s crawling slowly into the light.

My Review: Don't read this at night. Or while you're alone. Or if you're in a faltering relationship. Or while the computer's on. And for heaven's sake turn your phone off!


The roaches were in high spirits. There were half a dozen of them, caught in the teeth of love. They capered across the liquor bottles, perched atop pour spouts like wooden ladies on the prows of sailing ships. They lifted their wings and delicately fluttered. They swung their antennae with a ripe sexual urgency, tracing love sonnets in the air.

These are the first words to smack your chops when you open the book. This is the tone and this is the content that Ballingrud will bring to you. If that doesn't appeal to you, if you don't want to smile and wince simultaneously, this isn't your best book choice. For me it was a go from the cover art to the hypercreepy ending.

Novellas are always tough to review. The issue is how to tease but not spoiler, of course; but horror reviewing is even more complex a task because the atmosphere, the is-ness of the story, has to be conveyed and yet discussing the atmosphere even indirectly can telegraph too much for many experienced readers. It's a puzzlement, to quote a king.

Will is a shallow guy with no compelling reason to go looking for his greater depths. A job as a bartender is damn near perfect for a guy like Will. Structure keeps him from doing a hot-Jello number, changing from a wibbly-wobbly shape into a colorful smear on his page in the Book of Life.


Life so far seemed like a kind of dance to him, and he was pleased to discover that he was pretty good at it. Lf there was something hollow underneath it all, a well of fear that sometimes seemed to pull everything else into it and leave him clutching the stone rim for fear of falling into himself, well, that was part of being human, he supposed. That's what the booze was for.

Sounds familiar, doesn't it, we've all had or have a friend like this. It's almost impossible not to have, since these are the guys that float free in the social ocean. We run across them, they get tangled in our nets, they're just there one day and then off they float. If you don't wrap the guy up in the net and try to make him stay, he's a fun companion and a good guide to the good life wherever you are. That net, though, that'll scare the less intelligent one and will fail entirely to contain or control the smarter rest of them. Like them for who they are, sure, but never kid yourself that this relationship is the rock on which your life's cathedral can be built.

Will is in love with one woman and living with a different one. Neither of the women are under any illusion about Will's nature or how suitable Will is as a mate. They're all in for a rough ride in this tale, and there are few doubts in any woman's mind about how far she can trust a man whose roots are shallow. The surprise for all three is that Will's roots are not in the least shallow. They're deep and they're widespread. They don't happen to be in the right place.

Will's slow descent into a state of paralysis fooled everyone. Will was the most fooled, though, because his misconception about his essential nature drives him to chase a dangerous dream: heroism.

The haunted object in this story, the cellphone with an open line to hell itself, exerts a deep and irresistible pull on Will and his live-in. Each of them get in above their head in searching for the meaning of this weirdly cheerful-looking object's grisly, grim audio-visual offerings. Will finds his live-in seemingly comatose after she finds a video link to...something...not anything recognizable as menacing, but loaded with the wrongness that marks out true evil. He is horror-struck, of course, and brings the lady back to reality seemingly unharmed. Once. Had she stopped there, the course of their life might have righted itself. Will's response was a good index of how off-base his self-image really was. A truly shallow person would not have found the horribly banal image on the screen unsettling, or the strange and almost inaudible audio track...simple breathing or something so like it as to make no difference...haunting, mesmerizing, inescapable.

Sadly for all concerned the incident replays itself with the escalated wrongness inevitable in this tightening downward spiral. Will is sent an image that demands immediate response from any decent human being, seemingly sent to him by his live-in; he rushes to her side and finds her as seemingly comatose as she was the first time he found the evil wrongness on her computer screen. Twice in a lifetime is too much exposure to this kind of evil to escape unharmed. Both of them are tidally stressed to the point of fracture by this event. In their fracturing relationship's final moments, the true and horrible price of becoming entangled with evil is exacted.

I think I can sum this up by saying, "Ballingrud's writing and subject matter are deceptively innocent and will seriously skeeve you out in the end."
Posted by Richard at 6:30 AM