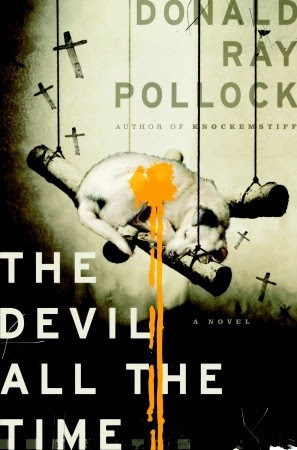 ***2017 UPDATE***A FILM IS COMING***starring Robert Pattinson as Reverend Roy. This will be interesting.***

The Publisher Says: “Take a man from Ohio who's worked blue collar, send him for an M.F.A., and set him loose. From the acclaimed author of Knockemstiff—called “powerful, remarkable, exceptional” by the Los Angeles Times—comes a dark and riveting vision of America that delivers literary excitement in the highest degree.

In The Devil All the Time, Donald Ray Pollock has written a novel that marries the twisted intensity of Oliver Stone’s Natural Born Killers with the religious and Gothic over­tones of Flannery O’Connor at her most haunting.

Set in rural southern Ohio and West Virginia, The Devil All the Time follows a cast of compelling and bizarre characters from the end of World War II to the 1960s. There’s Willard Russell, tormented veteran of the carnage in the South Pacific, who can’t save his beautiful wife, Charlotte, from an agonizing death by cancer no matter how much sacrifi­cial blood he pours on his “prayer log.” There’s Carl and Sandy Henderson, a husband-and-wife team of serial kill­ers, who troll America’s highways searching for suitable models to photograph and exterminate. There’s the spider-handling preacher Roy and his crippled virtuoso-guitar-playing sidekick, Theodore, running from the law. And caught in the middle of all this is Arvin Eugene Russell, Willard and Charlotte’s orphaned son, who grows up to be a good but also violent man in his own right.

Donald Ray Pollock braids his plotlines into a taut narrative that will leave readers astonished and deeply moved. With his first novel, he proves himself a master storyteller in the grittiest and most uncompromising American grain.”

My Review: This is Donald Ray Pollock's first novel. After being mauled and kicked by Knockemstiff, his short-story collection, I was chomping at the bit for this book to come in to my village library. Today was my first wholly peaceful day, and what better thing to do with a peaceful day than to read about the broken and forgotten members of Murrikin society?

So I got on the Greyhound for Knockemstiff, garlic around my neck and an illegal assault rifle perched in the seat beside me, scared stiff that one of these Hill Williams was gonna start some shit with the fancy New Yorker getting' off the bus.

Look...read Knockemstiff and, if you feel the need to bleach your eyeballs and you want to scream, cry, and unswallow on average once a page, this isn't the book for you. It's not that worse things happen in it, although some do happen that made me scream, cry, and unswallow, it's that this novel is unremittingly grim and a lot less easy to stop reading than a story collection is.

I started this book around 4pm. It's now 3am. I paused long enough to eat some cucumber and tomato salad and a wedge of watermelon around 10pm, and I think I piddled around midnight...but that was with the book propped open on the tank top. I'll mop the floor tomorrow...errrmmm, later today.

Pollock is the kind of writer Hemingway wanted to be. Simple, elegantly shod, carefully manicured sentences whip out their truncheons and, never mind the flying blood, wail on the innocent reader's brain-box. Dazed, in pounding agony from the grinding of severely fractured bone plates in the readerly skull, eyes absorb and record and flinch away from the matter-of-fact violence. It's not played for gore or shock. Pollock just...writes it the way it was in his head.

Mother of all the gods. That sentence scares me shitless.

The stories that make up the braids of the novel are, in themselves, good novellas. Put together, though, the effect is overkill. Oh dear. Bad choice of words. It's one bridge too far into horrorville. The last thirty or so pages, while well written, just didn't keep up the pace of revelation. In every other part of the book, there was a blood clot coming loose and causing fresh damage as the characters got closer to the inevitable ending...so I kept moving...and then, well, some of that sense of howcanhetopthis zomg he did it got lost.

And now I will be turning on the Snarkinator. Those whose tastes are for tomes lit'ry which ahhhr evah sew reefahayned, please seek the exits.

Pollock got an MFA. I find MFA writers are all much of a muchness to me. A bit like opening a box of dried dates hoping for something other than a sugar coma, permaybehaps a peppermint or a Red Hot secreted in amongst the sticky soft sweetness. I have my list of offenders, but I've puked on them elsewhere, so I'll leave it at Paul Auster Jeffrey Eugenides Jonathan Franzen Dave Eggers Jonathan Safran Foer et alii, none of whose books I can tell apart from the authors's various ouevres without a look at the spine or title page. Yes yes, nice sentence, lovely image, I'm sorry was something supposed to move me here, to reach across the gap between our brains and change me? Cause it sure as pork rinds didn't. And it never does, all the mooin' and carryin'-on y'all groupies do aside.

And, not a small consideration, is it me, or is it he? I could simply be grumping about this because the way things turn out isn't the way I want them to. But hang on! The ending, you'll recall I said above, is inevitable. And it is. The only ending this book could have. I liked it!

So maybe, just maybe, it's that bloody degree reefahayneeng the gasoline-and-pigshit essence of this wonderful book. I sure as all get-out hate that idea. I suspect it's true. But, and this is KEY, do NOT let this discourage you from visiting the bottom of the heap with Pollock. This is the real deal.