REMEMBER MY BEAUTIES, a concentrated dose of family drama and healing from Lynne Hugo's able pen 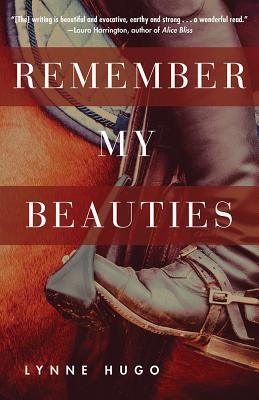 The Publisher Says: Imagine a hawk’s view of the magnificent bluegrass pastures of Kentucky horse country. Circle around the remnants of a breeding farm, four beautiful horses grazing just beyond the paddock. Inside the ramshackle house, a family is falling apart.

Hack, the patriarch breeder and trainer, is aged and blind, and his wife, Louetta, is confined by rheumatoid arthritis. Their daughter, Jewel, struggles to care for them and the horses while dealing with her own home and job—not to mention her lackluster second husband, Eddie, and Carley, her drug-addicted daughter. Many days, Jewel is only sure she loves the horses. But she holds it all together. Until her brother, Cal, shows up again. Jewel already has reason to hate Cal, and when he meets up with Carley, he throws the family into crisis—and gives Jewel reason to pick up a gun.

Every family has heartbreaks, failures, a black sheep or two. And some families end in tatters. But some stumble on the secret of survival: if the leader breaks down, others step up and step in. In this lyrical novel, when the inept, the addict, and the ex-con join to weave the family story back together, either the barn will burn to the ground or something bigger than any of them will emerge, shining with hope. Remember My Beauties grows large and wide as it reveals what may save us.

My Review: ***This review courtesy of the publisher and NetGalley***
Three and a half stars is a good rating, the Amazon Curve Effect notwithstanding. For a novel of simple aims and told in a gentle Southern accent, coming from this particular reviewer, it's terrific and to be cherished. I asked for this story more in the nature of an experiment, testing NetGalley and finding them easy to use; I still loathe reviewing things from the Kindle, but as it's rough to talk publishers out of tree books and not likely to get easier, I'm looking to get used to it. Also not to think of that last sentence fragment as capitulation, mere sucking it up.

Fraying family cords and broken ties that bind are familiar territory to me from my offline life. I've read a fair bit of "family fiction," almost all of it by female writers, and honestly it all blends into an even-hued much of a muchness after a short time. I didn't embark on this trip, then, expecting anything good to happen, and in fact would've been relieved if this had been utterly average, a 2.5-star read. It is decidedly better than that. This is a good book, well written, and is in its unspectacular way offering excellent value for time invested.

Lynne Hugo puts us in medias res as Jewel bustles about doing chores for her disabled mother and father. She has Jewel address us in the first person, always a warmer and more inviting voice than third person narration. It's clear that Jewel isn't doing anything she feels is unusual for the ingrates, but her patience is fraying at both ends as she navigates that uproarious good time that is called, with deceptive blandness, the sandwich generation. Oh yes, white bread and creamed tuna time, caring for and fretting over parents and children simultaneously. Whee. No, no, give me more, I can do this in my sleep, honestly I can. Sleep! Ha! Jewel's little girl is a teenaged drug addict living with her druggie boyfriend now he's out of jail. That should send seismic shudders up every parental spine.

Then comes the magnitude 10 quake. Jewel's mother's favorite child and only son returns to the nest to mooch off his parents now that the statute of limitations has run out on his most recent crime committed in the family's home state of Kentucky. Jewel's reason to hate him is personal and rattled my cage from the inside. It doesn't help matters any that her father, never known for being supportive or most of her life even sober enough to recognize Jewel, says his usual nothing in support of her angry ultimatum: He comes, I go. Her mother snorts mightily knowing that Jewel will back down and keep on doing everything for everyone else because the family horse farm would have to rid itself of the horses if she didn't do all their care herself. Her brother? Please! He wouldn't be likely to know which end was which unless the horse was actually in motion.

Yeah? Take this, Smuggsy McSmuggington: Jewel keeps her word. Gone. No help. Of course her word is only kept after the most vile, awful discovery a parent can make is made, but it is nonetheless kept.

And now the frayed edges of the family tapestry march inward, becoming frayed middles and even threatening to meet and unravel the whole mess. But the winds of outrage, rage, hurt, and embarrassment have a dual effect. They blow the threads from one end to the other of the tapestry, causing the most astonishing bits to knot together, even as they tatter and fray the fabric. The integrity of the tapestry as a newly re-formed whole holds through more betrayal, death, and reconciliation. It's true that what was once a Francis Bacon portrait now resembles a late-career Picasso, but it's holding and that holds everyone around the hearth up.

I'm going to stay coy about the nature of the explosions, winds, and quakes because it's a spoiler so awful to reveal that even I, no spoilerphobe, think it's a good idea to discover for the reader's own self. So there.

I have a few gripes, of course. One is the speed with which the family stump becomes a family shrub, if not a tree, by the end of the book. It's a feel-good ending, which I was expecting, but it's so blatantly telegraphed from the middle of the story on that I wanted to be irked. Never quite made it. Several plot twists had me curling my lip as it seemed to me that the author was aware of the blatancy and did her best to ameliorate the sense of anticlimax without going back to first principles and making the structure of the story more robust. That said, this isn't a tale you'd choose expecting William Gass or Rikki Ducornet to stare back from the page. It's art as catharsis, not art for art's sake. Catharsis it will deliver ably and amply. But I was also folksied out by the end of the (short) book:


There's more to people than history. There's more than they wear on their faces. Not everyone, most likely, but most.

It's trite and true. It's completely of a piece with the tone of the rest of the book. I was relaxed and lulled by this in the beginning, but it wore on me the more of it and the longer I read. If the book hadn't been edited to a smartly paced minimum I'd've Pearl Ruled it around p100.

I'll end by stressing again that this was not a chore to read, it was as pleasant a three and a half hours to spend in the throes of catharsis as any I've spent. If you aren't looking to uncork some family angst, though, this would not be my first choice for you to read.

But if you are, grab the tissues and hold on tight. We're heading into a canter through the nettles and it hurts so good.