THE ENCELADUS CRISIS, or "Prepare For Your Emotional Heat-Death" by Michael J. Martinez, a Bad, Bad Man 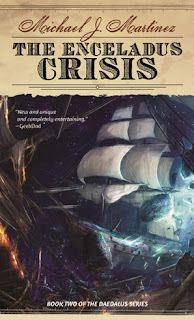 The Publisher Says: Lieutenant Commander Shaila Jain has been given the assignment of her dreams: the first manned mission to Saturn. But there’s competition and complications when she arrives aboard the survey ship Armstrong. The Chinese are vying for control of the critical moon Titan, and the moon Enceladus may harbor secrets deep under its icy crust. And back on Earth, Project DAEDALUS now seeks to defend against other dimensional incursions. But there are other players interested in opening the door between worlds . . . and they’re getting impatient.

For Thomas Weatherby, it’s been nineteen years since he was second lieutenant aboard HMS Daedalus. Now captain of the seventy-four-gun Fortitude, Weatherby helps destroy the French fleet at the Nile and must chase an escaped French ship from Egypt to Saturn, home of the enigmatic and increasingly unstable aliens who call themselves the Xan. Meanwhile, in Egypt, alchemist Andrew Finch has ingratiated himself with Napoleon’s forces . . . and finds the true, horrible reason why the French invaded Egypt in the first place.

Review links: THE GRAVITY OF THE AFFAIR — THE DAEDALUS INCIDENT — THE VENUSIAN GAMBIT

My Review: This is a horrible book.

No, really. Don't let my star rating fool you, this is an evil, evil book. It kept me awake all night finishing it, and left me at an extremely important moment, and has the audacity to make me wait until I recover from breathless sleeplessness or sleepless breathlessness or near-lethal emotional exhaustion...whatever...to read the rest of the story!

Michael J. Martinez, you are a bad, bad man.

How dare you rip Shaila apart like you did? I am outraged on her behalf, because I am convinced we'd be besties in real life and she's hurting after the awful thing you made her live through. Poor lamb. But she's not alone, oh no no no, there's Maria having her toenails ripped out (figuratively) by the whipsaw betrayals and losses you pile on her. Then, not satisfied with that, you go and arrange the big, scary horror-movie level betrayal behind her back! It's ungentlemanly. And Anne...! Words fail me at your turpitude towards Anne! I about had an attack every ten pages from the horrors inflicted on Anne. Weatherby, of course, all noble in his suffering, was the one you went easiest on, bounder that you are. He gets some hurt but really, not that much compared to the women's sufferings. Was that by design? These are some tough women and I know that they're getting close to the end of their tethers. Or if they're not, alchemy is at the root of it.

Not to mention alchemy, oh my gawd, the alchemists! The hubris, the vanity, the sheer muddleheadedness these men display with regard to their Great Work's powers and pitfalls. Immoderate, all of them, simply immoderate and most unseemly in their pursuit of their aims. And what badly chosen aims they are, to drive these foolish mortals to the extremes of stupidity you drive them to! I was astounded more than once that the ambitions of these men were so breathtakingly sweeping. Nothing short of modulating the future course of the human race, and us all unknowing and very unlikely to consent to it! Oh...and the scientists, add them to all the above, root and branch they're every bit as bad as the alchemists.

Except Finch, come to think on it. He's the one dashing around picking up the pieces after his attempts to stop the crisis from exploding fail. He really is the whitest hat in the whole bunch of 'em. That whole voice-of-reason vibe he's workin' is a godsend. (Nice touch, BTW, god in 2134 but God in 1798.) (Oh yeah, and that other cultural lift was really nice, you big damn hero-worshipper you.)

Plucking my heart-strings, playing me for a fool, yanking my chain like you did is, is, well I don't know exactly what it is but it isn't nice. Humanity's future is, in your view, bleak, and you make a convincingly real case for it based on events in today's papers. I suspect you're quite happy, in a ghoulish way, about the election playing out before our appalled eyes. Either outcome will bring your grim vision of the corpocracy bleeding the sheeple closer to reality. It is happening before our eyes and we're not looking the right places or seeing the right things or something, so there's not enough horsepower (yet) to drag us back from the brink.

That sound you hear? The loud one, clangclangclang? That's Michael J. Martinez, Major Meanie that he is, sounding the alarm for us all to wake up and look up from our TVs and computers and smartphones, look around, and take some bold action.

Wakey-wakey!
Posted by Richard at 1:19 PM