THE EPIC OF ASKIA MOHAMMED, a poetic translation of an African foundational myth 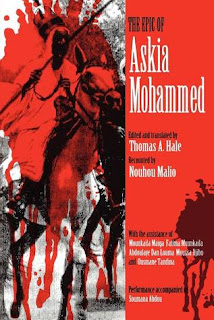 The Publisher Says: Askia Mohammed is the most famous leader in the history of the Songhay Empire, which reached its apogee during his reign in 1493-1528. Songhay, approximately halfway between the present-day cities of Timbuktu in Mali and Niamey in Niger, became a political force beginning in 1463, under the leadership of Sonni Ali Ber. By the time of his death in 1492, the foundation had been laid for the development under Askia Mohammed of a complex system of administration, a well-equipped army and navy, and a network of large government-owned farms. The present rendition of the epic was narrated by the griot (or jesere) Nouhou Malio over two evenings in Saga, a small town on the Niger River, two miles downstream from Niamey. The text is a word-for-word translation from Nouhou Malio's oral performance.

My Review: 1,602 lines of oral foundation myth. I was afraid to take it on, really, but was seduced by the sheer spoken beauty of it. And I can't stress "spoken" enough: Don't read this book, speak it!

As with any cultural record of a time and place unknown to me, and likely to most people raised in the USA, there was a learning curve to be surmounted before I could really understand the sounds I was making of the poetry. In fact, I found it most useful to read the line references in the Annotations section immediately after reading the Preface and the Introduction. These were all indispensable steps to appreciating the world that was unfolding before my mental eye. It's an astonishing fact that American students are simply not introduced to non-European information about Africa to this very day. I can't begin to fathom that, until I realize that the purpose of this is to make Africa "ours" by appropriation yet again.

The best way to push the veil of ignorance aside is always to read. Reading the foundation myths of a culture is a necessary step to becoming a well-educated person. This epic poem is a great piece of literature, and as such a great window into the West African world of the past thousand years. The fact that the Songhay Empire was a vast, sophisticated political unit and is unknown to most of us outside Africa is unnerving; that we have the nerve to place the people of Africa in the "developing nations" category is breathtakingly arrogant, given the gorgeous culture that unfolds in The Epic of Askia Mohammed. It is in no way acceptable to dismiss the Songhay Empire as "pre-European" since the Empire was formed and maintained without even a nod to European purposes and ruled through a sophisticated apparatus that owed no debt to any Eurpoean model or purpose. This culture was its own unique self. That shouldn't even need to be said, but the English-language references I've found to the Songhay Empire now that I know to look for them tend towards a tone of condescension and dismissal.

The reader, or performer, of this epic poem will quickly see the folly of that attitude. Translation is an imperfect art. The translator of The Epic of Askia Mohammed relied on many generous African colleagues to get it right. That the job was done well is most apparent as one speaks the phrases, finds the rhythms of the lines and the flow of the underlying dynastic narrative. It's a very good job, although I have no way to know for myself how faithful it is to the original epic. As with all translations, I'm left to glean accuracy and veracity from the feel, the texture, the sensation of the whole as I experience it first and latterly remember it. An imperfect gauge, yes, but it reads "excellent" to my eye and ear so I'm satisfied.

I am very grateful to Indiana University Press for sending me the review copy I requested. I appreciate the fact that I had the opportunity to experience this tale for myself, and I'd encourage you to do the same.
Posted by Richard at 8:30 AM