MISSIONARY is my six-star read of 2017, deserves your paltry money and your eyeblinks 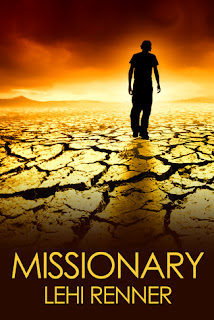 The Publisher Says: The Prophet provides everything for the Flock, demanding absolute devotion in return. Before allowing men to wed, they must serve Him, which they do willingly to get their brides. There’s only one little problem. When each man has multiple wives, there’s simply far too many boys.

Jacob Wright’s questioning nature has always gotten him into trouble. The only book he has access to is The Word, but he thinks too deeply about the contents, far more than a devout boy should. When he’s called by the Prophet to serve a mission, Jacob believes his quest for answers has begun, only to discover the more he knows the less he believes.

Kerioth Marshal is an authoritarian, keeper of all knowledge past and present. His duty is to oversee the missionary center library, holding close the secrets of the Prophet. He’s accepted loneliness as part of his job, but then Jacob comes, offering him an escape from isolation. At first, Jacob’s inquisitive nature amuses and enchants him, but how long will it be before Jacob realizes Kerioth has saved him from one horrible fate only to subject him to another?

Second, I would never have found the book had it not been for a Goodreads group called Gay Science Fiction. I'm coming out of a nasty reading slump and that makes me, to be frank, unwilling to translate from the heterosexual into my native tongue. I'm tired of reading about women who don't like their husbands, are abused by their fathers, etc etc etc. And the unbearable white heteronormative genre that SF has always been gets dreary too. I needed a resource to guide me past yet more gynergy or, worse still, misogyny. I found the group, I found the bookshelf and, best of all, I found one of the mods had posted about this title finally being available.

I read the synopsis above. Mmm...high stakes! Daddy/son relationship! A religious dystopia! Check, check, and check on my readerly desiderata list. A $3.99 gift card later, I settled in for a long summer's afternoon of getting safely riled up about fiction instead of world events that upset me.

This North Korea-run-by-Mormons tale smacked my teeth in, kicked my kneecaps, and made the Kindle pages blink past as fast as my thumb could tap the screen. In the Flock's territory, the Prophet is the autocratic leader of the church and the state. The Prophet's many, many wives have given him many, many children. The other church leaders have equally cushy tushy supply. The average man has three wives, the more status he has the more wives he adds.

How, you might wonder, does that work. The women are property, barely educated since their purpose in the world is to bear children (one woman is revealed to have died giving birth to the eighteetnth child). They have no semblance of rights, and are married off as early as twelve years old. The average man has no semblance of meaningful rights. He's led by the Prophet's local guy, he's required to make his children perform physical labor for the Prophet starting as young as five years of age, and the Prophet has set up a system to "call into missionary service" prepubescent boys who are...misfits...some too aggressive, some too full of questions, some physically unfit...and from there springs our story.

Jacob Wright is bursting with questions about everything. His father, his first, second, and third mothers, his teachers can't keep up. In an information-poor society they aren't equipped to answer the questions anyway. But no amount of disapproval can keep Jacob from asking and wondering and pondering. Thus it is that he is called to the missionary training center, where he expects to be trained and sent out among the Heathens outside the Gate to convert them. Jacob's bus ride to the missionary center is excitingly interrupted by a military attack from the heathens, whom Jacob sees for the first time. He sees desperate, dirty soldiers who will attack a busload of children, and cracks form in his idea of why he's off to become a missionary.

Things do not go as expected by Jacob. Nor do they go as planned by the theocratic machinery. Kerioth, the missionary center's authoritarian (head dude in charge of being in charge), interviews Jacob and senses something within the boy that makes him special and valuable. Kerioth singles Jacob out for special education, pays him personal attention, and generally makes life in the rigidly compartmentalized and hierarchical center endurable.

As time passes, Jacob learns more and more about Kerioth and more and more about the Flock's society. He is, after his eighteenth birthday, finally admitted into Kerioth's extremely difficult work world as well as his bed. The child has become a young man; the questing intelligence has matured into a worthy and beloved intellectual companion to the lonely and isolated Kerioth.

The job of authoritarian...to be the Flock's memory of dead times and forbidden practices...is one that Kerioth shares to a limited degree with Jacob. The years that flow past the men are full of silences both beautiful and tense. The slow unfolding of Jacob's understanding of the Prophet, his family, and the very terrifyingly evil way the Flock keeps its promise of three wives for every average man, more for men of higher status, is a titanic blow to Jacob's sense of the rightness of the world he grew up in.

And, at the end of the book, the natural and inevitable and inescapable conclusion to the story...

...is completely upended and shook around and pounded on the storytelling rocks Author Renner has gathered, placed, balanced, and mortared into place, like an octopus being tenderized for dinner. Tentacles of tale meat flail in every direction. Eyes and brains pop against the solid foundation rocks with the force of the change in direction.

But for once this sudden shift isn't cause for puma-screaming killing rage. It is a far, far, far more important story that, in the last lines, Author Renner promises us.

Six stars for that alone.

Also boosting the six-of-five case is Kerioth's intense and respectful passion, love, and need for Jacob. In a society that spends huge effort on controlling all females, males are untrammeled in any meaningful psychosexual ways. Kerioth could have started sexing up Jacob the second he saw the boy had he wanted to. Not one peep would've been uttered by anyone. Kerioth is so appalled by the idea of sexual abuse of children that he simply refuses to countenance it.

This resonates with me, as the child of a sexually abusive pedophile mother. It made me feel Kerioth, for all his fears and quirks, was at heart a decent man with a bedrock of honor from which he operates.

Jacob's growth into a partner for Kerioth is satisfying as well. Jacob never stops learning. Jacob also has a sneaky streak in his pragmatic nature. He "manages upward," so to speak, leading Kerioth to the conclusions that Jacob wants him to arrive at. The more information Jacob acquires, the more he leads his true love Kerioth into rebellious and seditious thought-patterns.

But the secret that the missionary center conceals...its true purpose to the Flock...is so extremely NOT what Jacob or I was expecting that it rockets this theocratic dystopia to the very top of my reading list for 2017. It is stunning. I can't even hint at it. I want everyone I know to read the book RIGHT NOW so we can all discuss this, this, I can't even be coherent, this abomination, this darker, more horrifying, more unspeakable cousin of the Final Solution.

Yes. I went there. Author Renner has, in these 300-ish pages, created a nightmare theocracy that is built on something worse than the Final Solution.

Fear him. Words have power. Read his $3.99 vision of a hell so awful you will not be able to look away or to fully process its scope.
Posted by Richard at 7:33 PM