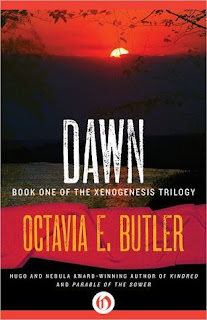 The Publisher Says: Lilith Iyapo has just lost her husband and son when atomic fire consumes Earth—the last stage of the planet’s final war. Hundreds of years later Lilith awakes, deep in the hold of a massive alien spacecraft piloted by the Oankali—who arrived just in time to save humanity from extinction. They have kept Lilith and other survivors asleep for centuries, as they learned whatever they could about Earth. Now it is time for Lilith to lead them back to her home world, but life among the Oankali on the newly resettled planet will be nothing like it was before.

The Oankali survive by genetically merging with primitive civilizations—whether their new hosts like it or not. For the first time since the nuclear holocaust, Earth will be inhabited. Grass will grow, animals will run, and people will learn to survive the planet’s untamed wilderness. But their children will not be human. Not exactly.

This ebook features an illustrated biography of Octavia E. Butler including rare images from the author’s estate.

2020 UPDATE: Amazon Prime will be the home for DuVernay's series! Victoria Mahoney, of Star Wars: The Rise of Skywalker and Lovecraft Country fame, is credited as creator and will adapt and direct the pilot.

2018 UPDATE Don't forget that, in this troubled passage in US and world history, the present Golden Age of Sci Fi on Screen will gift us with the first-ever adaptation of a Butler novel, this one, by no less a new voice than Ava DuVernay. She is the talent behind the good-buzzed adaptation of A Wrinkle in Time!
^^^Which I myownself really liked. Toxic fandom's victims abound.

My Review: I left publicly viewable notes from my Kindle reading on Goodreads. I think those are enough of a review of the specifics of the writing in this book. They're tied to passages I found important and so will, I hope, make the aesthetic points as to why I think you should read this book.

What I comment on now is the why of reading SF, fiction by women, fiction by people of color (a phrase I'm no more comfortable with than the "colored people" of my vanished youth), SF by women of color...reading and absorbing and thinking about the ideas given to you, amazingly freely and trustingly, by people you aren't like and maybe even people you don't like.

I think you should read these astounding gifts of personal creativity because they offer a close look into the ideas that someone unlike you finds important. If you don't learn what people unlike you find important, you run the risk of being caught in a labyrinth of dark sameness, a place where you don't need light because you know the contents of your environment so well already that there's no read need to take a good look at them.

And that is how we got to the point where we are as a country, here in the US as well as in the UK, and a culture, both in the West and the East. No one listens. We wait for our turn to talk without engaging our brains to process what our ears are hearing. And that's only if we're polite.

Open up a little by reading Butler's tale of the Oankali changing earthlings' genetics to improve their health and well-being. In the wake of a species-ending nuclear war, the earthlings aren't grateful to the Oankali for rescue, they're angry that they had no choice, no say, no chance to refuse being saved if it meant being used and manipulated for and by the Oankali.

Butler put her finger squarely on the conflict: The earthlings were given no choice. They were unquestionably manipulated before they were given any chance to comment on these things. They had also just blown their entire planet into an extinction event. Did they deserve a say? Butler gives Lilith the words to complain about the earthlings' treatment and the Oankali to explain but not apologize the whys of it.

In my never-humble opinion, a species that blew its home into an extinction event over stupid crap doesn't need any consultation to be offered, still less consent to be sought. Be damned good and grateful these interstellar gene machines arrived in time to do squat for you, which they didn't have to do at all. Given their culture's immense experience with and commodification of gene manipulation, they could simply have paused, grabbed some material (aka survivors of the holocaust) and used them before disposing of them.

The Oankali's ethics are superior to the earthlings', and they didn't do that. They set about repairing the damaged earth and improving the damned earthlings who caused the problem in the first place, while making every effort to understand and support them along the way.

A lot like animal researchers are doing today among cetaceans and great apes.

Don't like having done to us what we so blithely do to others, do we? And yet it's perfectly justified...the changes are being made for the earthlings' future benefit, after all.

After the weekend of 10 August when neo-Nazi and "alt-right" hate machines burst their closet doors of simply screaming at normal, decent people at last and began the hot war portion of their Civil War against goodness, kindness, and decency, reading a book like Dawn is an excellent primer in how this horror got started: A decent and perfectly reasonable human gets all bent out of shape and even decides she'd prefer to die rather than have her tiny little patch of personal control violated despite the certainty that she is and will continue to be better off for it.

I was never sanguine about human nature. I'm not turning any corners in that regard now. But I can see a tiny thread visible in the labyrinth: Read. Read the stuff that isn't just like you like the world to be. At least try that much, because it's no exaggeration to say your way of life is on the line. Try to hear what the Other is saying underneath the screams. We have to find the thread and follow it to our common source or we're headed the way of Butler's earthlings.

And I do not think there are any Oankali on the way to help us.

#ReadingIsResistance
Posted by Richard at 6:30 AM