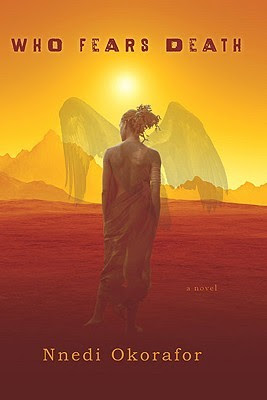 The Publisher Says: An award-winning literary author presents her first foray into supernatural fantasy with a novel of post- apocalyptic Africa.

In a far future, post-nuclear-holocaust Africa, genocide plagues one region. The aggressors, the Nuru, have decided to follow the Great Book and exterminate the Okeke. But when the only surviving member of a slain Okeke village is brutally raped, she manages to escape, wandering farther into the desert. She gives birth to a baby girl with hair and skin the color of sand and instinctively knows that her daughter is different. She names her daughter Onyesonwu, which means "Who Fears Death?" in an ancient African tongue.

Reared under the tutelage of a mysterious and traditional shaman, Onyesonwu discovers her magical destiny-to end the genocide of her people. The journey to fulfill her destiny will force her to grapple with nature, tradition, history, true love, the spiritual mysteries of her culture-and eventually death itself.

My Review: Who fears Death? I suppose most living things fear death. Onyesonwu, our title character, is the product of a genesis no one should have to carry with them: She is a child of rape, a product of brutality that should have made her mother hate her. Instead, her mother names her “who fears death” and never from that moment on, despite the both of them being outcast and made into The Other, never fears anything again.

I had a very hard time with this book, wanting to Pearl Rule it on average three times per reading session. I did in fact abandon it when a major major major anti-man hot button issue occurred near the end. But this is what earns the book four stars from me: I could not not read the rest. I had to know why what happened, happened.

Am I happy I read it? Not really. It was harrowing for me. I don't like man-bad-woman-good books. There are two unforgivable things in my moral universe: Abusing animals and rape. I'm no fan of supernatural/magjicqkal stuff (Onye's a shapeshifter). What on the surface of the earth persuaded me to read this thing?! I mean, it's even praised by Luis Alberto Urrea forevermore! I shoulda stood home, as the saying goes.

But Dr. Okorafor is a sorceress. She cast a spell on me. She reached out from inside this book and she made sure my brain needed to know this, and needed it so much I'd overcome my prejudices and make it part of my mental furniture.

I will step on her foot if I ever meet the Doctor in person.

She set the book in a post-nuclear-holocaust Africa! I love postapocalyptic fiction! How am I gonna resist that? And she made explicit a disdain for the rotten, evil-souled uses of religion in oppressing and abusing people of all types. I think I purred. I know I smiled.

It's also a joy and a pleasure to me to see women, and women of color, and women of immigrant parentage, enter the lists of American English-language speculative fiction. It makes me feel that this world has a shot at survival after all. Writers are not ignored because of their bodily plumbing or skin color or weird names. (Sorry, but I'm still an old white man, and this lady's name is really seriously weird to me.) This is the world I grew up wanting to live in, and now I get to...for a while anyway...and that, more than any other factor, made me stick with the book long past my usual stop.

Should you read it? Should you turn page after page of non-European-named characters, landscapes bursting with heat and searing miseries of spirit, heroes whose lives are blighted by origins beyond their control?