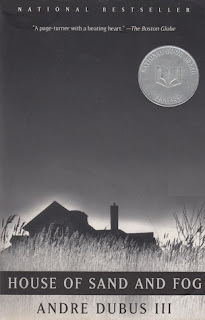 The Publisher Says: On a road crew in California, a former colonel in the Iranian Air Force sees a way to restore his family's dignity in an attractive bungalow available on county auction. But the house's owner, a recovering alcoholic and addict down on her luck, will fight for the one thing she has left. And her lover, a married cop, will be driven to extremes to win her love. In this masterpiece of American realism and Shakespearean consequence, Andre Dubus III's unforgettable characters careen toward inevitable conflict, their tragedy painting a shockingly true picture of the country we live in today.

My Review: Behrani. An exiled colonel in the Shah's army. Kathy. A fucked-up druggie living off her inheritance. Lester. A major idiot whose law-enforcement career is his last best shot at staying off welfare.

Not one of these people will leave this book better than they entered it. Kathy's only home is the one she inherited, and the county says it's not hers anymore because she hasn't paid the taxes. She has, though. She's completely unable to function in the world because she's hazed on drugs for so long that even when she's clean she can't think straight. That means she can't figure out how to prove she has complied with the law.

Behrani can't get an American life going. He has savings (one hesitates to imagine where the money came from originally) that barely keep him afloat, and jobs that demean him but are all a man with no skills except being an Army officer can get. But his son's college money is sufficient to buy a distressed property at auction. Kathy's home, as it turns out. He plans to renovate and flip it, using this as a stepping-stone to American Dream-level prosperity.

Lester comes in as the deputy assigned to be sure Kathy gets out of the home that's no longer hers. Love at first sight! Lame-o Lester and Loser Kathy...surely the white trash Romeo and Juliet!

Dubus drags us through the legal system as the parties battle out the rights and wrongs of the case. No one here is a good person, just a greedy selfish prick who deserves what, in the end, is meted out to them by the author's just and pitiless exercise of karmic debt collection.

NOT an uplifting book. My withers were wrung about every twenty pages, and I took frequent breaks in order to console myself with excessive liquor consumption and sordid sexual escapades.

I love a book that brings out the best in me.

Did you *get* that? A man wrote about the thing most men want more than food and only slightly less than air, and made it *unappealing*.

Dubus is a master of his craft. He is an artist. He can do anything he wants with words to make them dance in the reader's head to HIS tune, screw whatever you were expecting, reader! He can fashion a story that, in its outlines, sounds juicy and ripe with conflict, and make it a sharp object that will deflate whatever happy illusions were still in your head about yourself and this Murrikin Dream we're supposed to be having, reader!

And that is why you should read this book.