IRREPARABLE HARM, in which a corporate attorney rediscovers her soul 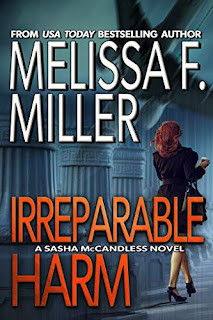 The Publisher Says: There's an app for everything. Even evil.

Attorney Sasha McCandless is closing in on the prize after eight long years: she's months away from being made partner at a prestigious law firm. All she has to do is keep her head down and her billable hours up.

Then a plane operated by her client slams into the side of a mountain, killing everyone aboard. Sasha gears up to prepare a defense to the inevitable civil lawsuits.

She quickly realizes the crash was no accident: a developer has created an application that can control a commercial plane's onboard computer from a smartphone. Now it's for sale to the highest bidder.

Sasha joins forces with a federal air marshal who's investigating the crash. As they race to prevent another airline disaster, people close to the matter start turning up dead. Sasha must rely on both her legal skills and her Krav Maga training to stop the madman before he kills her.

Sasha will need to rely on her legal training and her Krav Maga training in equal measure to find and stop a madman before he strikes again.

My Review: If you'd like to see how far Amazon has to go with its integration of Kindle highlighting into it title quotations, go look at this. Yikes.

Anyway, lookee here at me writing a review! And of a book I read on the Kindle, where if I'm lucky I get around half of what's going on! And follow that link to see just one of my mechanical issues with the Kindle as a note-taking device...I left three notes myownself, all carefully done, and they're only visible to people who bother to read them. Mine make sense, I promise, and I didn't leave dangly bits of sentences or anything. Why aren't they in the quotes? I could not tell you.

But back to why I'm reviewing a Kindle thriller: I think you should read it. I was engaged all the way through, even the parts where Author Miller walks me through the steps of a krav maga attack/defense, which she did several times when once would've been enough. Better yet, most of the time I was excited. Me! The cynical old "and how many times have I read *that* trope?" pursey-lipped nay-sayer! Excited! As in "can't you go up to the dining room for dinner, I'm reading" excited!

Why, you ask...and I'm glad you did because I was fixin' to tell y'all anyway...because Author Miller is a lawyer, and it shows, who *gets* that a legal case is a story with multiple main characters, a built-in motive for a crime, a cast of necessary characters already in place, and a plethora of available outcomes from one established set of facts.

Which is my attempt at tweaking her lawyerly nose with a dryly legalish presentation of the compliment that she followed the winding maze of legal hoo-hah without being predictable or, as I prefer to think of it, lazy. Writers who set the pattern for themselves and then just follow it write well-plotted but often...uninspiring...stories. It feels to me as though Melissa Miller tried to do that but was foiled in her attempt by the stroppiness of both Sasha and Naya, and the exasperated admiration of Judge Cook for Sasha was also (I suspect) a little bit of a surprise to Author Miller. I got the feeling Leo needed to catch up with Sasha a time or two when he was led by the outline to expect her *here* but she was *there*. These are good things. They show me the story was alive when it was published.

The parts of the story that left me the most contented were the usual suspects in a series mystery: ma'at is served, the bad are punished in a manner both swift and condign, and the events of the story leave the landscape intact but altered. This is, to the best of my knowledge, the first book published by Author Miller. It is the first in her series of ten thrillers starring Sasha.

And I suggest you think before you buy: The other titles are $4.99 each. You'll want them. I do, and am choosing which pennies to pinch so as to procure them next month.
Posted by Richard at 6:30 AM