WATER FOR ELEPHANTS, a rare film adaptation that does the book justice 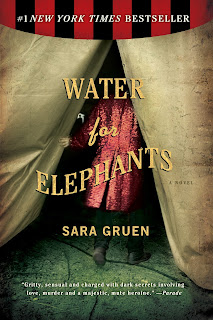 The Publisher Says: Though he may not speak of them, the memories still dwell inside Jacob Jankowski’s ninety-something-year-old mind. Memories of himself as a young man, tossed by fate onto a rickety train that was home to the Benzini Brothers Most Spectacular Show on Earth. Memories of a world filled with freaks and clowns, with wonder and pain and anger and passion; a world with its own narrow, irrational rules, its own way of life, and its own way of death. The world of the circus: to Jacob it was both salvation and a living hell.

Jacob was there because his luck had run out—orphaned and penniless, he had no direction until he landed on this locomotive “ship of fools.” It was the early part of the Great Depression, and everyone in this third-rate circus was lucky to have any job at all. Marlena, the star of the equestrian act, was there because she fell in love with the wrong man, a handsome circus boss with a wide mean streak. And Rosie the elephant was there because she was the great gray hope, the new act that was going to be the salvation of the circus; the only problem was, Rosie didn’t have an act—in fact, she couldn’t even follow instructions. The bond that grew among this unlikely trio was one of love and trust, and ultimately, it was their only hope for survival.

Surprising, poignant, and funny, Water for Elephants is that rare novel with a story so engrossing, one is reluctant to put it down; with characters so engaging, they continue to live long after the last page has been turned; with a world built of wonder, a world so real, one starts to breathe its air.

My Review: I don't want to give anyone the wrong impression here. I am not a sentimental old softie whose external resemblance to a conker

is meant to scare off the timid.

But books about old folks remembering their bittersweet pasts, books about people caring for and about the animals that they share their lives with, and books about losing your beloved far too damned soon in life do drive a teensy-tinsy little wedge into my sharp green spikes, revealing what I laughingly refer to as a "heart" for the briefest of moments.

Without spoilering anything, the clue I will give you to my rating of this novel is that all three stars are for Rosie.

When this book came out in 2006, it was a huge smash success. Sara Gruen touched a nerve with her evocation of the 1930s traveling-circus world. People resonated like rung bells from one end of the US to the other. I read the book then, and reacquainted myself with it recently, to remember what it was that caused the ruckus.


Age is a terrible thief. Just when you're getting the hang of life, it knocks your legs out from under you and stoops your back. It makes you ache and muddies your head and silently spreads cancer throughout your spouse.


Although there are times I'd give anything to have her back, I'm glad she went first. Losing her was like being cleft down the middle. It was the moment it all ended for me, and I wouldn't have wanted her to go through that.

I think many, if not most, of the book's fans really resonate with these assessments. I know I do. It's not the most original kind of observation ever made but it's presented in a pleasantly conversational tone, one that gives the meaning precedence over the words.

Gruen also has Jacob thinking through the problems of great age. Since the main body of the story is set quite a long time ago, Jacob gets to tell us his story unchallenged. His memories may be unreliable, how would we know?, but he gives them to us with gusto and a charming smile. That's what we all hope to do, isn't it, give the younger folks coming behind us a reason to smile as we share what we have stored in our Random Access Memory?


My platitudes don't hold their interest and I can hardly blame them for that. My real stories are all out of date. So what if I can speak firsthand about the Spanish flu, the advent of the automobile, world wars, cold wars, guerrilla wars, and Sputnik — that's all ancient history now. What else do I have to offer? Nothing happens to me anymore. That’s the reality of getting old, and I guess that’s really the crux of the matter. I’m not ready to be old yet.


Sometimes when you get older — and I’m not talking about you, I’m talking generally, because everyone ages differently — things you think on and wish on start to seem real. And then you believe them, and before you know it they’re part of your history, and if someone challenges you on them and says they’re not true — why, then you get offended because you can’t remember the first part. All you know is that you’ve been called a liar.

It's an indignity perpetrated on most of us by the vast legions of those addicted to Being Right. Really, I want to say to the I'm Right And Don't You Forget It judges, give it a rest. Believe me when I tell you your own turn in the unreliable memory chair is coming soon. It's better to treat those memories other folks choose to share with you as their stories and not be ready to hop on the Being Right Soapbox. It's a theme that Gruen seems to me to be developing, though rather in the breach than the observance.

So these quotes give you a fair sampling of the book's storytelling voice. These ideas are the ones that Gruen really bears down hard on exploring in Jacob's voice. So why am I giving all the stars to Rosie? Because this elephant, though she never utters a word, is the most vibrantly alive character in the book. Jacob is any-old-man. Rosie is not, I promise you, any old elephant! And the pleasure of Jacob and Rosie having their relationship makes this a book I didn't mind revisiting. The love affair that is the primary catalyst of all the story's action, that between Marlena and Jacob, centers on Rosie as Marlena performs her act for the circus with Rosie. Jacob, the vet, is Rosie's constant companion. Rosie is, in my mind at least, the real star of the circus and the book.

In 2011, Reese Witherspoon and Robert Pattinson added a layer to the book's luster by embodying (damn near perfectly, in my never-humble opinion) Marlena and Jacob, the star-crossed lovers at the human heart of the tale. I'm no great fan of ~meh~ movie adaptations to popular books. I've generally got some choice invective for incompetent or poorly handled film versions of books. This adaptation is one I felt got the tone, the indefinable something that made the book such a success, right. The adaptation is also visually stunning, simply pitch-perfect in its period details and an immersive delight to watch.

The one problem I had with both the book and the movie is a big one: I didn't buy the love story in either medium. I just do not get the sense that Jacob really had the grand passion for Marlena that's reported everywhere in the text and the script. I certainly don't think Ms. Witherspoon and Mr. Pattinson were attracted to each other. That kept cropping up in the way of my full investment in the story.

Rotten Tomatoes, the internet movie-review aggregator, counts this as a mostly-fresh release. Its total number of professional reviews is a whopping 191, making its Fresh rating of 60% quite impressive. 68,000 regular civilians who use Rotten Tomatoes to track their film likes and dislikes give the adaptation Fresh ratings 70% of the time. 1.1 million ratings on Goodreads average 4.07 out of five for the novel. No matter the medium, the message to the audience comes through loud and clear, and the audience agrees with it. That, my friends, is called "huge success" and deserves the rewards thereof.