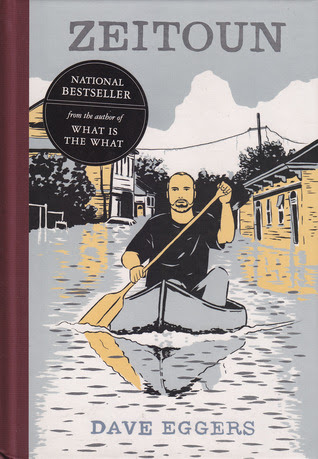 The Publisher Says: When Hurricane Katrina struck New Orleans, Abdulrahman Zeitoun, a prosperous Syrian-American and father of four, chose to stay through the storm to protect his house and contracting business. In the days after the storm, he traveled the flooded streets in a secondhand canoe, passing on supplies and helping those he could. A week later, on September 6, 2005, Zeitoun abruptly disappeared.

Eggers’s riveting nonfiction book, three years in the making, explores Zeitoun’s roots in Syria, his marriage to Kathy — an American who converted to Islam — and their children, and the surreal atmosphere (in New Orleans and the United States generally) in which what happened to Abdulrahman Zeitoun was possible. Like What Is the What, Zeitoun was written in close collaboration with its subjects and involved vast research — in this case, in the United States, Spain, and Syria.

My Review: Okay. I herewith open my piehole for the crow to be inserted. I have said nasty, judgmental things about Eggers's writings, and I meant each and every one of them. I still do.

But this book is excellent, and this book is Eggers's, so it is obvious that the old adage about a stopped clock being right twice a day applies to writers and writing as well.

It's a direct, elegantly simple telling of the nightmare side of the American Dream. It's powerfully focused, unlike every other one of Eggers's overpraised books that I've read, and it's superbly structured, with no room for improvement in pacing and character development that I can find.

I don't believe I'm typing these things, someone reassure me that this is *me*! Every criticism I've leveled at this guy's previous writing is out the window! Will they turn off the gravity next?

But truth is truth, and honesty compels me to say: I haven't enjoyed a book this much in ages. Well, enjoyed is a strange term to use for the true and factual, and awful, story of a decent, honorable man made the butt of society's opprobrium for no reason other than his religion and origins. But the book is deeply enjoyable, because at every turn, Zeitoun's decency and honor and integrity shine through. That alone makes the book worth buying and reading. Add to that the fact that, rare in this world failed of kindness, Zeitoun summons the best and the most positive people to him in his desperate hours.

I am disappointed that Twilight *shudder* and The Life of Pi *retch*, vastly inferior books to this one, and to name but two of the many, many books this applies to, have more copies on Goodreads.

Please...do your part to change this, and go buy a copy. Then read it. It will, contrary to any expectation you might have, leave you uplifted and happier for having read a book about Hurricane Katrina and an Arab immigrant. Very strongly recommended.

And, thanks to my friend Terri for making me read this...even sending me a copy...one it will be extremely hard to release back into the bookosphere. That I will *have* to buy a replacement is a small economic price to pay.

********Addendum in 2013: Yes indeed, Zeitoun has been arrested and accused of crimes recently, and many have taken this as an invalidation of his post-Katrina experiences. Apparently no thought is given to what these experiences of injustice in The Home of The Free might be expected to do to a man is irrelevant to those who hold this opinion. That's just bad, sloppy thinking. What happened to Zeitoun after Katrina is still real, and his story of that time is still one of a horrifying miscarriage of justice using "race" as a flimsy, transparent attempt at justification.

And of course, from the vantage point of 2017, the story never quite got better, as Kathy Zeitoun alleged a long pattern of domestic abuse, attempted to have Zeitoun re-arrested, etc. etc. Again...and again...and again it must be said that, even if every awful thing ever said about the man is true, none of it excuses the horrors he experienced at the hands of the legal system.
Posted by Richard at 6:00 AM