THE HEART OF THE MATTER, a book that had the opposite of its intended effect on me 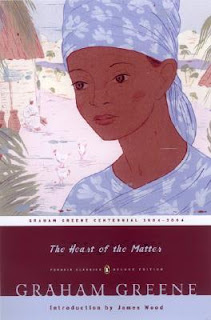 The Publisher Says: Graham Greene's masterpiece The Heart of the Matter tells the story of a good man enmeshed in love, intrigue, and evil in a West African coastal town. Scobie is bound by strict integrity to his role as assistant police commissioner and by severe responsibility to his wife, Louise, for whom he cares with a fatal pity.

When Scobie falls in love with the young widow Helen, he finds vital passion again yielding to pity, integrity giving way to deceit and dishonor—a vortex leading directly to murder. As Scobie's world crumbles, his personal crisis makes for a novel that is suspenseful, fascinating, and, finally, tragic.

Originally published in 1948, The Heart of the Matter is the unforgettable portrait of one man, flawed yet heroic, destroyed and redeemed by a terrible conflict of passion and faith.

Greene himself didn't like the book, which was a species of roman à clef. I suspect, though I don't have proof, that he was simply uncomfortable at how much of his inner life he revealed in the book. Scobie's infidelity and his fraught relationship with the wife he's saddled with must have been bad reading for Mrs. Greene. But the essential conflict of the book is man versus church, the giant looming monster of judgment and hatred that is Catholicism. Greene's convert's zeal for the idiotic strictures, rules, and overarching dumb "philosophy" of the religion are tested here, and ultimately upheld, though the price of the struggle and the upholding aren't scanted in the text.

Stories require conflicts to make them interesting, and the essential question an author must address is "what's at stake here?" The more intense and vivid the answer to that question is, the more of an impact the story is able to make. Greene was fond of the story he tells here, that of an individual against his individuality. He told and retold the story. The state, the colonial power whose interests Scobie/Greene serves, is revealed in the text to be an uncaring and ungrateful master; the rules of the state are broken with remarkably few qualms when the stakes get high enough. It is the monolith of the oppressive church, admonishing Scobie of his "moral" failings and withholding "absolution of his sins", that he is in full rebellion against...and in the end it is the church that causes all parties the most trouble and pain.

Greene remained a more-or-less believing Catholic. I read this book and was stumped as to why. The vileness of the hierarchy was so clear to me, I couldn't imagine why anyone would read it and not drop christianity on the spot. But no matter one's stance on the religion herein portrayed, there's no denying the power of the tension between authority and self in creating an engaging and passionate story. A must-read.