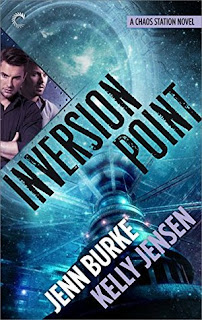 The Publisher Says: Zander and Felix's relationship has been to the brink and back: the Human-Stin War, imprisonment and an actual death/resurrection. Zander's death, to be specific, and the experience has left him…changed. The mysterious race known as the Guardians chose to revive him and appointed him as their emissary. A high honor, but he could do without the group of would-be cultists following him around the galaxy.

When a recently discovered species destroys a stin probe, Zander's new role soon commands all of his time and focus. The human ambassador—Felix's ex-lover, much to Zander's annoyance—pulls them into strategy talks aimed at preserving galactic peace. Soon everyone is relying on Zander's Guardian tech to telepathically communicate with the strange aliens.

Only Felix seems concerned with the strain piling up on Zander, but he has his own resolve tested when the very stin that imprisoned him show up to a summit. Zander and Felix will both have to find a way to face their doubts and preserve their love—while preventing another galaxy-wide war.

My Review: There was more "w"-verbing (winking, which I abhor, abominate, and despise) at 74% but for that one and only time it was less than revolting in context.

I'll get to reviewing before long.

So another solid four-plus star outing in a series whose SFnal street cred, if we could only get some straight boys to read it, would carry it far beyond the m/m ghetto. The resonance is my absolute favorite race so far, not excluding humans, because "fluffy yellow partner unit" made me laugh until my belly ached. I could *see* Flick's confused amused slightly insulted mostly bemused face when he heard that. Men with curly blond hair must get similar nonsense thrown at them all the time, and the fact that he's the reasonably public partner of the Emissary of the Guardians can't make life as a mop-top any easier.

The political elements of this outing are genuinely involving, again without reference to m/m content...well, except for the fact that Flick is the space equivalent of Alma Mahler Gropius Werfel, having bagged humanity's chief envoy Theo as well as Zed the Emissary. Ducks always envy the swans, hm? What is it about some people, anyway, that they can score the best and the brightest without seeming to bring anything all that exciting to the table themselves? But wait, Flick is...well...Flick is from a world where ambassadors are equivalent to unicorns and now his sweet, lovely ex is one and his amazing one-true-love man is one and he's, you know, just this guy. His head's whirling. He's interacting with the stin, the very same precise stin who tortured him almost to death during his four-year stint as a POW just cuz. He's way outside his comfort zone and he only gets more remote from it as Ambassador Theo the ex-lover sets Emissary Zed the one-true-love's teeth on edge and causes him to act like a sulky adolescent ninny. Which for all of me is the best moment in the book. I love that Zed gets all "my man step off or suffer" about his Flick. Sure it's silly! No way in hell can even the scrummy hotness that is Theo compete with Zed's amazeballs pedigree, position, and prior claim on Flick's feelings. But your man being just a little extra attentive and a scoche more possessive in the presence of a potential rival? Yes please. Very agreeable if not carried too far, and Authors Burke and Jensen don't let it get out of hand.

The tragedies that befall our heroes are testing and frightening and the stakes are unfathomably high: a renewal of the Human-Stin War with a side order of Species Four/the resonance in the stin's sights as well. Flick pays a horrible personal price to keep this from happening. Zed will have nightmares the rest of his life about Flick's sacrifice, its reason and its agent.

That's the set-up, however, for one of the best endings I've read in a book lately. The resolution of the war threat and the reward for Flick's horrifying sacrifice is...sweet beyond belief, balm for so many wounds these awful author-ladies have put our guys through. I would give the book five stars just for the ending.

I can't quite do that. The ashushk have had their major inning. The stin, well, not sure that we need a lot more stin assholishness but we'd be better informed if we saw a weentsy bit more of their culture for some whys. It's the resonance that causes me to dock a half-star from the rating. I know, because it's been made clear, that the series ends with book five. You introduce me to the resonance and expect I'll trot happily alongside the carriage as it briskly bowls AWAY from the coolest aliens yet?! (Sorry, Qek.) In one of this era's billion-page-per-volume nonillionologies, sure okay I get it we'll be back around this way one say soon.

BUT THIS IS IT!

So very not cool. I'm being kind because ending but absent that I'd probably bust this one down a whole star or even two for the tease this represents.

Write more books in this series, please. Not with Zed and Flick, even, just in the wonderful and rich universe. Space operas are a blast to read, and I am completely at your mercy, great BurkeandJensen, for writing a solid one with men like me in it.
Posted by Richard at 6:30 AM