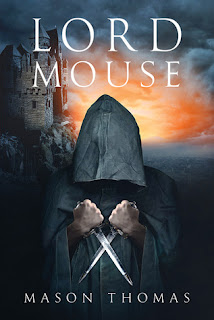 The Publisher Says: Scoundrel by nature and master thief by trade, Mouse is the best there is. Sure, his methods may not make him many friends, but he works best alone anyway. And he has never failed a job.

But that could change.

When a stranger with a hefty bag of gold seduces him to take on a task, Mouse knows he’ll regret it. The job? Free Lord Garron, the son of a powerful duke arrested on trumped up charges in a rival duchy. Mouse doesn’t do rescue missions. He’s no altruistic hero, and something about the job reeks. But he cannot turn his back on that much coin—enough to buy a king’s pardon for the murder charge hanging over his head.

Getting Garron out of his tower prison is the easy part. Now, they must escape an army of guardsmen, a walled keep and a city on lockdown, and a ruthless mage using her power to track them. Making matters worse, Mouse is distracted by Garron’s charm and unyielding integrity. Falling for a client can lead to mistakes. Falling for a nobleman can lead to disaster. But Mouse is unprepared for the dangers behind the plot to make Lord Garron disappear.

My Review: I started keeping track of how many malapropisms I found in the book. I noted them on the Kindle. From when I started counting there are eight (8) notes. That's appalling. That's inexcusable. That's bad editing. It was like getting pinched or having someone pull on my beard. So annoying.

I was also a wee bit verschmeckeled by the modern-then-archaic-then-modern vocabulary:


“Worry it none,” he replied offhandedly. “I took no offense. This is what I do.” And later we can discuss ways for you to thank me, he added silently.


Garron threw him a look. “You sure know how to win people over.” “I can be charming,” Mouse retorted. “When need be.” And he wasn’t going to waste his time kowtowing to some entitled snob that he was going to ditch somewhere at the first opportunity. Garron pressed his lips together in a sardonic snarl. “Warn me when it’s about to happen so I know to keep an eye open for it.”

But in the end I can say I enjoyed the read because I agree so heartily with the attitudes of the men in love. I am sure as sure can be that I fell for Garron as hard as Mouse did when I read this:


“I’ve seen men,” Garron continued, “who claim themselves to be good and honorable do wicked things with ink and parchment. A most cowardly act, because they never have to face the ones they’ve wronged or feel the consequences of their deed. I have seen those who rail on about their own compassion willfully ignore those in need or treat those beneath them with contempt. “We all justify our dark behavior in some way, mask it behind some twisted form of truth that gives us license to do what we will. In my experience, people can rationalize the most reprehensible acts and sleep soundly through the night as if no blame rests upon their shoulders. Take Delgan. He has certainly justified my imprisonment and death sentence as something for the betterment of his city and his people.”