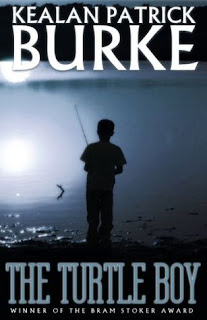 The Publisher Says: School is out and summer has begun. For eleven year old Timmy Quinn and his best friend Pete Marshall, the dreary town of Delaware, Ohio, becomes a place of magic, hidden treasure and discovery.

But on the day they encounter a strange young boy sitting on the bank of Myers Pond, a pond playground rumor says may hide turtles the size of Buicks, everything changes.

For it soon becomes apparent that dark secrets abound in the little community, secrets which come cupped in the hands of the dead, and in a heartbeat, Timmy and Pete's summer of wonder becomes a season of terror, betrayal and murder.

***DISCLAIMER***I know the author via social media. He didn't ask me to read or review the book.

My longtime Goodreads friend Dan reviewed this book some time back and that convinced me to Kindle it up. I liked it fine. I even got goosebumps twice.

What horrified me in the intended fashion was the relationship between Pete and his father. The supernatural goins-on I could see why the adults dismissed as imaginitive kidness. I did myself. But no one who's ever raised, been around, or even been a subteen could ignore the horror of what happens to Pete. His father Wayne was a monster from the second we meet Pete. The scariest kind of monster: the unfightable one. There's nothing an adult can do, really, when a situation like Pete's comes to light. Report to the overstretched child protective services? Would that help or hurt? No right answer. No good answer. That right there defines horror in real life.

There are supernatural elements in this tale as well. These were not my favorite moments, as anyone who knows me might guess. But the way Author Burke handles them won my skeptical heart over in the end. The reason he adduces to the apparition we see makes sense to me. I can suspend my immediate eyeroll reflex for the idea of psychic sensitivity as opposed to Manifestations Of EVIL *cue horror movie laugh* which, well, c'mon they're just silly aren't they? I mean really.

But then there's Author Burke's way with words. This novella, in roundabout 80pp, transported me to a place I've never been (and am in no rush to go to). I like atmosphere in my reading, and here's a sample of Burke's:


In the field beyond, high grass flowed beneath the gentle caress of the slightest of breezes. The land was framed by dying walnut trees, rotten arms severed by lightning long gone, poking up into the sky as if vying for the attention of a deity who could save them.

But even more important to me is the sense that the childhood of one Timmy Quinn is now over. It took one touch of the supernatural to change the boy into a manchild. It is irrevocable, this change, and it happens to all of us; usually it's not this moment of connection to the numinous realms, but the moment itself is universal:


The Turtle Boy's words returned to him again and again, nagging at him and begging to be decoded: You don't know who did it. When you do, remember what you saw and let it change you. Maybe he deserves to die.

Yes lawd! I been there, I witness, I testify. It's one of the first before-and-after moments that almost everyone remembers. We have them fairly frequently in the course of childhood, but they're just part of the scenery. This one is, for most people I've ever known, memorable enough to stick in the front of one's mind. Timmy Quinn's is especially memorable, I think we can agree, and it bids fair to stick in the front of *my* mind!

The reason to read the book is, though, that one enjoys the experience of the writer writing his best stuff for you. I liked the ideas, the insights, the writer's imagination coming to the fore and leaving me with a few surprises:


He sat so close to the water they could almost hear gravity groaning from the strain of keeping him from falling in.

It's free, forevermore. Download the darn thing and make it part of your mental furniture for that reason alone! But there are many more pleasures to be had for them as wants 'em.
Posted by Richard at 10:55 AM