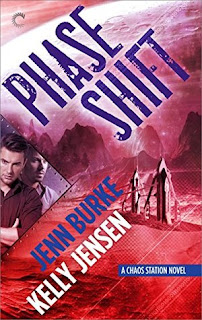 The Publisher Says: Zander and Felix’s relationship has always pushed boundaries—personal and professional alike—but their love and commitment is stronger than ever. So strong that Zander’s ready to ask commitment-shy Felix the question of a lifetime when he’s interrupted. The Chaos is being hacked, and crucial, top secret information about the project that created Zander—and his fellow super soldiers—has been leaked.

Neither man could have expected the enormity of what’s discovered at the end of the data trail: an entire colony of super soldiers run by the very doctor who changed Zander’s life forever. And now she needs them both—Zander to train her new crop of soldiers, and Felix’s new crystalline arm to stabilize their body chemistry.

With help from the unlikeliest of allies, Zander, Felix and the Chaos crew must destroy the project and all its ill-gotten information. But when the team is split up and Felix is MIA after a dangerous run, galactic disaster is a very real possibility…and Zander may have missed his chance to ask for forever.

My Review: I will miss this series very much. It came into my reading life exactly when I needed it. As endings to books go, and as endings to series go, I can't find fault or register a complaint.

There's a pearl-clutcher for yinz.

Probably my favorite scene in the whole Chaos Station universe takes place in this book: Zed and Flick are trudging across the fifty-centigrade surface of 83 Leonis Bb after tracing some vile malefactors' flight path back to it. There they discover an illegal, unregistered human colony sweltering in the revolting heat. Having lost their transportation off planet in a crash landing, they need to locate some form of beacon to get a signal to their compadres aboard the Chaos. This is not going to stop Zed from continuing a conversation he's been planning to have with his beloved for a while now: Zed wants to get married. Flick is, politely phrased, ambivalent. He has all sorts of reasons. All of which Zed has answers to, eg:


“Men have been allowed to marry other men since the fucking twenty-first century, Flick,” Zed growled.

This made me laugh and cry. How perfect, like the whole idea of not being *able* to marry is so firmly dead that it's a feeble excuse of an excuse not to marry. If there's a 23rd century, I hope like hell that's how it'll feel to the people in it.

I'm glad the end of the series was so fully satisfying. It made me smile through the misty-eyed "I always cry at weddings" sentimentality. And I loved the entire experience of reading a good SF series that had people like me as its main characters.

Goodreads user Simone made this JPEG of Zed's thoughts at the end of the book that sums this entire series up beautifully: 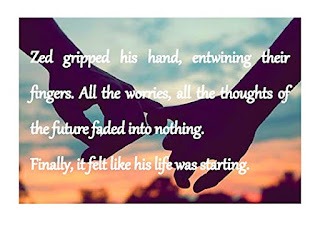