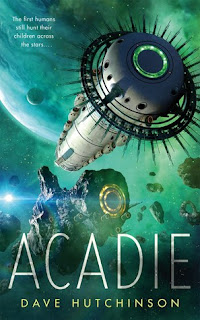 The Publisher Says: The first humans still hunt their children across the stars. Dave Hutchinson brings far future science fiction on a grand scale in Acadie.

The Colony left Earth to find their utopia--a home on a new planet where their leader could fully explore the colonists' genetic potential, unfettered by their homeworld's restrictions. They settled a new paradise, and have been evolving and adapting for centuries.

Earth has other plans.

The original humans have been tracking their descendants across the stars, bent on their annihilation. They won't stop until the new humans have been destroyed, their experimentation wiped out of the human gene pool.

Can't anyone let go of a grudge anymore?

My Review: What I love about reading Dave Hutchinson's work is the certainty that he's going to flip the script on you at some point. Usually just after you've become comfortable with the world as it is. And always to the effect that you're longing to go back to the way things were. But, just like life, that's not on the table. You can't unsee/unhear/unlearn what's happened. It's a bear, innit?

Why would a sane person like that?! As if I'd know what sane people like, still less why.

In the space of a novella, Hutchinson packs a space opera's worth of concepts and creations. Chief among them is the first-ever pop culture mention of kudzu in a positive light. Kudzu for the uninitiated is a terrifying invader of the southern USA. It destroys any and every man-made thing in its path. It terrifies me. But given its incredibly thoroughgoing colonial growth habit and ability to fix nitrogen, it makes sense to us it for structural elements in a hab(itat) in space.

Stuff still gives me the willies.

I love the use of quantum-entangled bits (qubits) for instant communication across immense distances. It sounds so plausible that I just assigned it the mental label ansible and didn't think much about it again while I was reading. It is cause for pause that I'm using one fictional communication concept to explain another in my mind...maybe I read too much sci fi...naaahhh, not possible. Quantity "too much sci fi" not defined.

It's also the script-flipping ending of the book that leads me into the star-granting stratosphere. It's delicious. It's like the Big Bang...it leads to more questions than answers, which is exactly how I want my fiction. I began to go back over the beginning as I read the ending. It made more sense. It made different sense, really, not more, and that's something to savor. I've read a lot of books in my life so I'm always after a new sensation. When I find one it makes me very happy.

Which leads to that missing quarter-star. Why, given the praise I'm heaping up here, didn't I give the damn thing the full five?