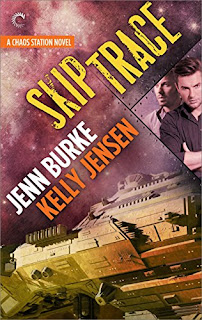 The Publisher Says: Zander Anatolius has been revived from the fatal effects of the super-soldier program, but now he has to face his estranged family and tell a story few would believe. With his lover and the crew of the Chaos at his side, Zander returns home to a media frenzy, threats from the military and pressure to join the family business.

Felix Ingesson still struggles with the horror of believing Zander dead. And no matter how strong their emotional connection is, Felix feels out of place in the glittery world of Zander's rich family. His lover would be better off without a broken, low-class ship's engineer holding him back.

My Review: When the crew receives word that another of Zander’s former teammates needs rescue, Felix travels with the Chaos...setting Zander free. But when Zander is arrested for treason, the men realize they need each other as much as ever—not only to survive, but to make their lives worth living.

I'd definitely read these as SF novels without hesitation. It's lagniappe that they include hot gay sex scenes. Written by nice straight ladies. Which I still very much do not comprehend. I'll try for a review very soon.

So I've finished the series now. In a lot of ways, this is where the tone of the books changes. This is the moment of truth for the couple as well as for Flick and Zed the men. After the astonishing events of Lonely Shore, anyone could be forgiven for needing to take a breath, step back, and just be for a while. Being Flick, he doesn't do this by halves. He walks to the Chaos, climbs on board, and flies into the black without saying one damned word to Zed. Who is, unsurprisingly, dealing with the very public fallout of the previous book's events, and the very private and equally life-altering family ructions that a wealthy youngest son can expect when he comes home from being thought dead in a vicious war trailing clouds of glory and his one true love the lower class station rat.

Flick looks at the world the Anatolius name entitles Zed to enter and his brain freezes, his balls try to climb inside to hide, and his spirit screams "FOR ALL THOSE USELESS GODS' SAKES RUN RUN RUN!!" He has no idea what fork to use...food itself was scarce in his household. He has no concept of how to dress...clothing simply kept him from being naked, for the most part. All those educated, cultured voices! All the smiles that feel like sneers!

That's a gap. And Flick running away hurts like stin poison. But he's not just running away, he's running to save a needy comrade. Zed's troubles escalate, his powerful family limbers up the big guns (Lawyers, Guns, and Money style). Unlike Warren Zevon's spoiled brat holed up in Honduras, though, Zed is targeted by the very people he's given up his humanity for, the AEF. He is still an embarrassment for the AEF because his existence means they have to acknowledge their disgusting super-soldier program that caused Zed so much damage. Now the AEF have received a small gift from the Universe: Zed's recent actions have placed him within their reasonable grasp, and they take full advantage of this to plot the final solution to the Zed Question.

Flick? He's not having any of it. He might be skittish as all hell from a bad childhood, enslavement at the stin's claws, and almost a decade of living in the vacuum of Zed's presumed death (while, ironically, it's Flick's presumed death in stin slavery that makes Zed vanish so utterly into the super-soldier program) that he can't and won't tolerate threats to his true love no matter who makes them. It is a constant in his life and the series.

But the current imbroglio is challenging in so many ways, and the superbaddies are so thick on the ground, and the resolutions to the Chaos crew's problems continue to be just out of reach, and...well. I can tell you this much without spoilering anything: Power corrupts and those in power see everything through the stinking atmosphere of their corruption.

The book ends with our augmented crew still flying, still precariously free, and still very much a real-feeling family. Pain and happiness come from so many of the same roots in intimacy, don't they. Blessedly for Zander and Flick, those roots are deep as the oceans in each man's soul. So satisfying.
Posted by Richard at 6:30 AM