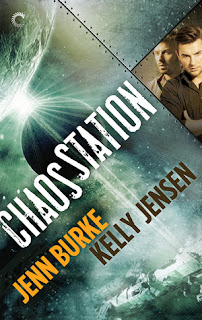 The Publisher Says: "You're not real. Felix Ingesson is dead."

The war with the alien stin is over, but Felix Ingesson has given up on seeing his lover, Zander Anatolius, ever again. Zander's military file is sealed tighter than an airlock. A former prisoner of war, Felix is attempting a much quieter life keeping his ship, the Chaos, aloft. He almost succeeds, until Zander walks on board and insists that Felix isn't real.

A retired, broken super soldier, Zander is reeling from the aftereffects of his experimental training and wants nothing more than to disappear and wait for insanity to claim him. Then he sees footage of a friend and ally—a super soldier like him—murdering an entire security squad with her bare hands and a cold, dead look in her eyes. He never expected to find Felix, the man he'd thought dead for years, on the ship he hired to track her down.

Working with Felix to rescue his teammate is a dream come true…and a nightmare. Zander has no exit strategy that will leave Felix unscathed—or his own heart unbroken.

My Review: Romantic fiction doesn't need much to keep the people buying...lovers separated by factors within their control and/or outside their control who, despite the obstacles, choose to make love work. It's a trope that's worked for millennia, it will work for as long as human beings keep falling in love.

This story goes above and beyond the basics in an important way. It develops the world the men who are the primary couple inhabit to a significantly greater degree than others in the genre. It is also the most fully science-fictional SF romantic novel I've read. I'd read it for the SF elements, albeit I'd judge it more harshly than I do as a romantic novel.

Part of that is altered expectations. At one time fifty or so years ago, world-building in SF was much lighter and less multidimensional than it is today. Novels were 200-ish pages as a matter of course and now they tend towards the 400-page end as a matter of course. There is vastly greater scope to do world-building in that kind of length. This novel, in common with most others in the romantic fiction genre, is 200-ish pages, so has the scope of a fifty-year-old SF novel for world-building plus the need to bookhorn in love and sex in a way that was and largely is unthinkable in mainstream SF.

Authors Burke and Jensen do a really fine job of this balancing act. I am impressed that they take the basic furniture of two disparate genres and re-cover them in harmonious upholstery, creating a charming and eclectic mental space for their men, women, and aliens to inhabit. It takes a good deal of work to do this at all, and even more to do it well.

I found the series in the Gay SF reading group and, on a hunch, Kindled the whole lot at once. Relieved that I did because I'm most certainly going to read them all. Zed and Flick are a terrific creation in that they're just guys. One's a tinkerer, one's a serious soldier, together they're little boys playing house and they're wounded warriors desperately seeking balance and order in lives mangled along with their tortured, altered bodies.

Flick/Fixer/Felix fixes stuff. He focuses on stuff because he was captured by the alien stin (and a note here on how very much I approve of Burke and Jensen's use of the lowercase for the aliens' race-names; we're not Humans, now are we?) and, while enslaved as a miner, tortured just for the fun of it by the insectoids. Stuff doesn't pity him or find him disgusting or try to help him. It waits for him to do what needs doing to fix it. His most powerful need is to belong, the be along with a group that gets him. His great good fortune is that he has that in the crew of the Chaos.

Elias is the captain, his business partner, and as close to Flick as a beloved older brother. Elias is straight but like everyone else in the spacers's world he couldn't care less what other people do in their sex lives. Elias is probably the least developed character, existing in relation to Flick and supplying needed perspective when a PoV change suits the story. He is believable for all that: His focus is on the bodily and mental health of the small crew he took on as his family. He's a dad. He makes sure everything is ordered and safe for his kids to be able to play and work and be as happy as they can be. He worries about them all, loves them all, and exasperatedly picks up after them, scolding all the while. I relate to Elias, and love him.

Nessa, the doctor, is Elias's love interest. Flaming red hair and a protective streak a mile wide have combined to seduce Elias and enchant the crew. Flick even loses his defensive shields when Nessa pushes him. She is a committed healer and makes everyone's health an obsession. It's hard not to see her as Dr. McCoy from TOS, with curves. I wished from the minute she came on my screen that I could book an appointment with her. She's the kind of doctor I'd love to find IRL.

Qek is the resident alien, a little blue woman instead of a little green man. Only she's not a woman, exactly, but a genderless ashoshk individual who identifies as a woman in order to live more easily among the humans she left her home world to study. Her race is technologically ahead of humanity, and like humanity has suffered the scourgings of the stin, so she is the pilot of the ashoshk-engined Chaos as she understands the tech better than anyone else on the ship. She is, as well, Flick's friend. Among the genderless ashoshk, Qek's offer of friendship to Flick is very deep. In a novel I love, Islandia, there is a concept of friendship similar to the ashoshk one called "linamia" or "powerful non-sexual love." It is a concept that, I fear, is largely missing in modern human culture and I think that's a sin. It's also a lifeline for poor, shattered Flick. Qek delights me, the anti-Neelix, the soothing and sweet and calm eternal outsider with sharp eyes and a soft heart.

Zed. Yes, well, then there's Zed. A younger son in a family of immense wealth and power, Zed chose a career in the military to be with Flick, his childhood bestie and young-adult first love. The war with the stin erupted and the two young lovers are separated forever by Flick's capture and presumed death at the claws of the stin. The powerful man whose love is fully, passionately given to the station rat boy he spent his childhood hanging with, suddenly has nothing. No bestie, no lover, nothing. (Except obscenely large piles of money and a family that adores him, but let's not get too logical...the man we're discussing here is very, very young and has zero perspective so let's go with his view of things.) So he volunteers to become a covert operative for his army, then for the black-ops experiment that informs the entire rest of his (drastically shortened) life. Zed is destroyed by Flick's loss and, unlike Flick who strives to endure and survive and make it the hell out of stin captivity, seeks annihilation so he can stop his agony of emptiness. In peacetime, Zed's the kind of man who self-medicates his agony. Me too, Zed.

Now all the characters are required to band together to rescue an old friend of Flick and Zed's who is on a rapid downward spiral. They find her, rescue her, lose her, fight a battle to recapture her, and the complications mount. New enemies are made, old wounds renewed. And the bittersweet joy of love regained, Zed and Flick's true and deep love for each other, widened to include their crew, is adulterated by the progressive nature of Zed's black-ops experimental enhancements. His downward spiral, slower than his and Flick's friend's spiral, is nonetheless real.

He's going to hell, but he's taking the scenic route and that leads right to Flick's bed. The place he's wanted to be for nine long, hellish years of knowing that Flick was dead.

And I plan to go right along with them all.
Posted by Richard at 6:30 AM