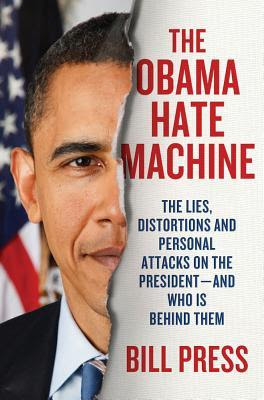 THE OBAMA HATE MACHINE: The Lies, Distortions, and Personal Attacks on the President--And Who Is Behind Them
BILL PRESS
Thomas Dunne Books
$26.99 hardcover, available now

The Publisher Says: In Toxic Talk, Bill Press exposed the ways in which the extreme right-wing media has done an end run around the American voting populace by exerting a disproportionate control over open political debate. In The Obama Hate Machine, Press returns to show how the Right has taken rhetoric to slanderous new levels in attacking the nation’s forty-fourth president.

While presidents and presidential candidates routinely have been subject to personal attacks, the outright disdain Obama’s extremist opponents have for the facts has inspired an insidious brand of character assassination unique in contemporary politics.

Obama was born in Kenya . . . Obama sympathizes with Muslim terrorists . . . Obama is a communist who wants to institute death panels and touch off class warfare…The extent to which these unfounded assertions have taken hold in the American mindset shows just how ruthless, destructive, and all-powerful the right-wing machine—hijacked by extremists in the media and fueled by corporate coffers—has become. The author reveals how corporate interests such as the infamous Koch Brothers continue to steer political coverage away from fact-based dialogue into the realm of hysteria. Bill Press also observes this phenomenon is not limited to the airwaves and provides an “I Hate Obama Book Club” list, calling out the scores of anti-Obama tomes—and even some from the Left—that have helped drag politics even deeper into the mud.

In his characteristic on-the-mark arguments sure to appeal to anyone on the Left or in the Center, Press shows how the peculiar nature of Obama-hating subverts issue-driven debate and threatens not only the outcome of the 2012 election but the future of the American democratic system.

My Review: I do not know what to say about this book. The people who should read it won't. The people who do read it will, if not sociopathic by nature, weep uncontrollably for the horrific fate of our country.

I tell myself that it's good, this outrage and pain I feel when reading the horrors perpetrated in the name of partisan conservatism, because when I stop feeling those feelings it will mean that I have given up any hope for change AWAY from the viciousness, the brutal ignorant selfishness, that is characteristic of today's “conservatives.”

Go to the library. Read Chapter 5, “The Brothers.” Sixty pages of documented and repugnant thuggery perpetrated by the Koch brothers against the democratically elected president of the United States of America. If it stirs in you no outrage against the monstrous, vile, and greedy people who pretend to care about the fate of the Americans who do the work that makes them rich, go buy your jackboots and practice your “Sieg heils” because that's the world people like you are passively agreeing to live in.

The Right is WRONG. And their actions against President Obama (not my favorite person, but still he's the president) are very, very, very close to seditious. They talk treason and call it free speech...which they've paid their millions to ensure for themselves and their horrifying, selfish, greedy views.

I tell myself it's good that these betrayals hurt me so, these smacks in my besotted citizen's face, because when they don't hurt anymore, I'll have given up on change, on reason, on life. I skate ever closer to this dread eventuality.
Posted by Richard at 6:30 AM