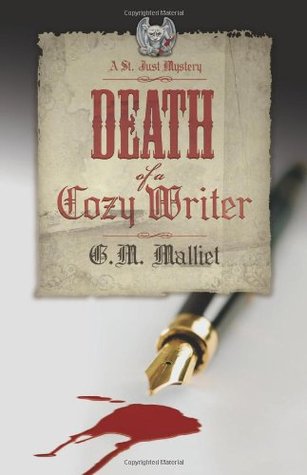 The Publisher Says: From deep in the heart of his eighteenth century English manor, millionaire Sir Adrian Beauclerk-Fisk writes mystery novels and torments his four spoiled children with threats of disinheritance. Tiring of this device, the portly patriarch decides to weave a malicious twist into his well-worn plot. Gathering them all together for a family dinner, he announces his latest blow – a secret elopement with the beautiful Violet... who was once suspected of murdering her husband.

Within hours, eldest son and appointed heir Ruthven is found cleaved to death by a medieval mace. Since Ruthven is generally hated, no one seems too surprised or upset – least of all his cold-blooded wife Lillian. When Detective Chief Inspector St. Just is brought in to investigate, he meets with a deadly calm that goes beyond the usual English reserve. And soon Sir Adrian himself is found slumped over his writing desk – an ornate knife thrust into his heart. Trapped amid leering gargoyles and stone walls, every member of the family is a likely suspect. Using a little Cornish brusqueness and brawn, can St. Just find the killer before the next-in-line to the family fortune ends up dead?

My Review: Well! That was nice. I reviewed this author's first entry into a newer series, Wicked Autumn, in 2011, and I was underwhelmed. The identity of the killer and the motive for the killing in that book annoyed me beyond measure. That series isn't one I'm inclined to follow, given how very many there are to sample.

THIS series, however, is a bit more to my liking. I think the character of St. Just, the policeman, is bland, a little uninteresting, but the characters of the bit players were vivid and amusingly overstated. I enjoyed the process of unwrapping the secrets and lies told by the many suspects in a series of nasty homicides, and the golden-age-mystery nature of their interconnections.

Was it fresh, new, and exciting? No, not really, and not even particularly fresh a take on why the victims were offed. But, and this is crucial, the pace is excellently maintained and the cast is well presented...no character is slighted and none is made too much of as a red herring. It's a tough balancing act and Malliet gets it just right.

So just maybe I'll get the next one from my village liberry and see what it has to show me. Pretty darn good work to overcome my annoyance with another series by the same author.

This work is licensed under a Creative Commons Attribution-NonCommercial-ShareAlike 3.0 Unported License.
Posted by Richard at 7:45 PM