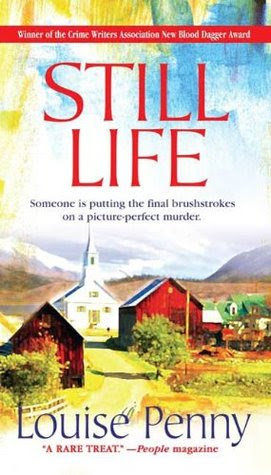 Chief Inspector Armand Gamache of the Sûreté du Québec and his team of investigators are called in to the scene of a suspicious death in a rural village south of Montréal and yet a world away. Jane Neal, a long-time resident of Three Pines, has been found dead in the woods. The locals are certain it’s a tragic hunting accident and nothing more but Gamache smells something foul this holiday season…and is soon certain that Jane died at the hands of someone much more sinister than a careless bowhunter.

With this award-winning first novel, Louise Penny introduces an engaging hero in Inspector Gamache, who commands his forces—and this series—with power, ingenuity, and charm.

My Review: Oh, the raptures of a first novel that also inaugurates a mystery series! It's like your first piece of birthday cake as a kid...OMIGOD this is good wait whaddaya mean I gotta wait another whole year to get another one you stink and you're mean *waaahIwantmymommy*

But crafty old fifty-plussers like moi wait. We lurk behind the bakery, sniffing the ineffable esters of birthday cakes destined for the inexperienced and the impatient and the indiscriminate, mentally filing away those scents most closely followed by moans and slurps of ecstasy, biding our time and hoarding our book-calories (aka money) to see which annual yumyums consistently produce those sounds and smells.

Here it is, ladies and what-all-else, the first birthday cake from Canadian cake-baker Louise Penny, and my GOD was it worth the wait!

A friend sent this to me as a Christmas gift. It came after self-same friend raved and jumped up and down and yodeled the praises of the series, featuring Inspector Gamache of the Quebec Surete (I can't help myself, I hear Gestapo jackboots and Euro-sirens every time I see that word) and the odd, off-kilter inhabitants of Three Pines, Quebec. I was practically panting with eagerness to get this package, which when it arrived proved to contain *several* of the Gamache series.

Being a good Virgo, I snatched up the first in the series, and applied eyes to page. Steadily. For four hours. I was 2/3 through with the book then, and *forced* myself to put it down because a) I had to walk the dog, b) I had to feed my 91-yr-old aunt, and c) I had to pee.

Let's talk about mystery series for a minute. I like them, as readers of past reviews will yawningly recall, because they satisfy my need for order, for the world to work *right* for a change. I think a lot of people feel similarly to me. But a series, iteration upon iteration of similar plots/characters/motivations/dialogue...what makes a well-read consumer of Lit'rachure such as I, and so many fellow Goodreadsers, am/are seek these books out? Comfort? Yes, but... Ease? Yes, but... Quality.

Some of the best storytelling going on in literature today happens in mysteries and thrillers.

Yeup, you can love or loathe Grisham's writing, but you CANNOT fault, in any way, his eye for a story. You can fairly say it's not to your personal taste, but don't even TRY to say it's "not good." Likewise James Patterson, Stephen King, Iris Johansen, et alii. There is a reason these folks are bestsellers, and it is NOT that the People got no taste. It's that these are storytellers, entertainers, creators of worlds we-the-people want to inhabit if only for a moment.

As was Homer, may I remind the snobs. No one thought much about Homer's stuff, except that it was rollicking good fun. Nobody even bothered to write it down for a few centuries *after* writing was invented. Somewhere on the Times bestseller list is the work of the Homer our culture will be remembered for, and it's not likely to be Faulkner. (Horrible thought: What if it's HEMINGWAY?!?)

Louise Penny's Three Pines is a place I want to go and stay, eating Gabri's bounteous cooking and flirting with Olivier and lusting from afar at unattainable Peter and gossiping unkindly with Ruth...then settling in for a long, quiet snifter with Gamache and Beauvoir and Clara, to think it all through and come to a reasoned conclusion about life. I am there with these people, these words-on-page creations that have the life only a deep well of talent can water into existence. I believe them. I think you will, too.

I offer this moment from very near the end of the book, when Clara realizes who murdered her very best friend:

Clara stared at her reflection in the window of {the victim}'s kitchen. A ghostly,frightened woman looked back. Her theory made sense.
Ignore it, the voice inside said. It's not your business. Let the police do their work. For God's sake, don't say anything. It was a seductive voice, one that promised peace and calm and the continuation of her beautiful life in Three Pines. To act on what she knew would destroy that life.
What if you're wrong? cooed the voice. You'll hurt a lot of people...But Clara knew the voice lied. Had always lied to her. Clara would know and that knowing would eventually destroy her life anyway.

If that doesn't make you sprint out to get this book, nothing else I can say will.

This work is licensed under a Creative Commons Attribution-NonCommercial-ShareAlike 3.0 Unported License.
Posted by Richard at 1:26 PM