THE IMPERFECTIONISTS isn't perfect...but it's excellent, and on sale! 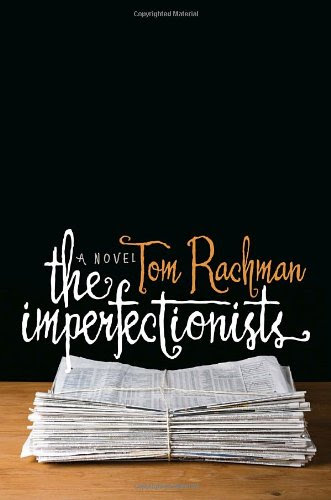 The Publisher Says: Set against the gorgeous backdrop of Rome, Tom Rachman’s wry, vibrant debut follows the topsy-turvy private lives of the reporters, editors, and executives of an international English language newspaper as they struggle to keep it—and themselves—afloat.

Fifty years and many changes have ensued since the paper was founded by an enigmatic millionaire, and now, amid the stained carpeting and dingy office furniture, the staff’s personal dramas seem far more important than the daily headlines. Kathleen, the imperious editor in chief, is smarting from a betrayal in her open marriage; Arthur, the lazy obituary writer, is transformed by a personal tragedy; Abby, the embattled financial officer, discovers that her job cuts and her love life are intertwined in a most unexpected way. Out in the field, a veteran Paris freelancer goes to desperate lengths for his next byline, while the new Cairo stringer is mercilessly manipulated by an outrageous war correspondent with an outsize ego. And in the shadows is the isolated young publisher who pays more attention to his prized basset hound, Schopenhauer, than to the fate of his family’s quirky newspaper.

As the era of print news gives way to the Internet age and this imperfect crew stumbles toward an uncertain future, the paper’s rich history is revealed, including the surprising truth about its founder’s intentions.

Spirited, moving, and highly original, The Imperfectionists will establish Tom Rachman as one of our most perceptive, assured literary talents.

My Review: I was very remiss with this book. It came out in 2010, and I read it that year. I've since gifted it to several others. Did I set down a review? No! Lazy lazy me. That doesn't mean that I don't encourage you to read it, because I do.

There is nothing of the novel about the book, though. Don't go in thinking you'll get Time's Arrow bedecked with cohesive details. You're getting interconnected short stories set in the same world. But say that to the marketing people at any publishing house, the buyers at every bookery, and even the Woman in the Street, and watch their eyes dim and their arms cross and their butts shift uncomfortably in the chair. Stories = Death in publishing. Less than a third the copies of a novel, be it hit, bestseller, or failure. So disheartening! So very annoying to me, too, since what is a chapter except a deeply woven short story set in a shared universe?

Anyway. Enough about that.

Why should all you storyphobes read this book?


“What I really fear is time. That's the devil: whipping us on when we'd rather loll, so the present sprints by, impossible to grasp, and all is suddenly past, a past that won't hold still, that slides into these inauthentic tales. My past- it doesn't feel real in the slightest. The person who inhabited it is not me. It's as if the present me is constantly dissolving. There's that line from Heraclitus: 'No man steps in the same river twice, for it is not the same river and he is not the same man.' That's quite right. We enjoy this illusion of continuity, and we call it memory. Which explains, perhaps, why our worst fear isn't the end of life but the end of memories.”

That's one of many passages that made me pause, reach for the Book Darts, and mull. Memories are us, we are our memories, life is a brief flash before the eyes and then a deposit on the stockpile of memories. Yes. Well. What makes that okay, for me, is the existence of literature and the presence in my environment of books. So Rachman puts it to me, in this passage, that my stockpile of memories is susceptible to loss and reminds me that it's something to fear...except:


“You can’t dread what you can’t experience. The only death we experience is that of other people. That’s as bad as it gets. And that’s bad enough, surely.”

Aha. Yes. As bad as it gets is losing the memories to come! Agreed, and in a very odd way, it soothed a bit of my ill temper at the inevitability of death. (I'm still ticked at the prevalence of loss, which is in fact a thing to dread.)


“I have to wonder if you're not being slightly naive here. I mean, are you saying that you want nothing from people? You have no motives? Everybody has motives. Name the person, the circumstances, I'll name the motive. Even saints have motives -- to feel like saints, probably. ... But still, the point of any relationship is obtaining something from another person.”

For good or for ill, that is the basic motivation, the essential need, the driving desire of them all, be they romantic, sexual, casual, intense, fleeting, or enduring. We want something, unless we're Bodhisattvas. That makes the whole of human existence sound so tawdry, doesn't it?

But nothing in all of the Universe is unmixed. Not even the pure chemical elements are unmixed. After all they each and every one began their existence as hydrogen, the simplest thing in all of creation, and were forced, compressed, annealed into their current pure states by the explosion and death of a star. From that death, that ultimate transformation of a bright and shining object into a myriad of other, unshining things, all of existence as we know it flows. Our own lives show us that endings are beginnings and all beginnings are neutral. It's what one does next, what flash of the present one accepts into the stockpile of memories, that determines which endings are "good" and which "bad." Rachman says this more succinctly, I think, when he writes, “Anything that's worth anything is complicated.”