A SECOND CHANCE, The Pause Button on The Chronicles of St Mary's...more please, now please 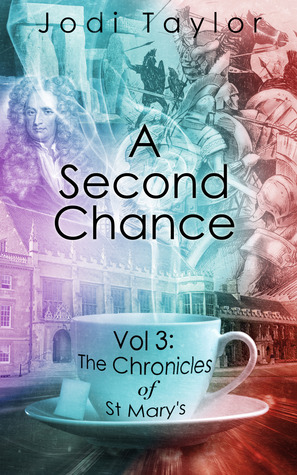 The Publisher Says: St Mary’s is back and nothing is going right for Max. Once again, it’s just one damned thing after another.

The action jumps from an encounter with a mirror-stealing Isaac Newton to the bloody battlefield at Agincourt. Discover how a simple fact-finding assignment to witness the ancient and murderous cheese-rolling fertility ceremony in Gloucester can result in CBC – concussion by cheese. The long awaited jump to Bronze Age Troy ends in personal catastrophe for Max and just when it seems things couldn’t get any worse – it’s back to the Cretaceous Period again to confront an old enemy who has nothing to lose.

So, make the tea, grab the chocolate biscuits, settle back and discover exactly why the entire history department has painted itself blue …

My Review: History slaps Max and St Mary's around a good bit. Kleio seems to favor the rough love school of affection. She really rides Max and the entire Institute hard this time out.

This is not the final installment of the series, at least it's not if La Taylor has any idea of what's good for her career, and yet this book is about aging, about slowing down, and not least...not at all least...about closure and releasing all that has come before as a means of surviving and also living fully, finally living fully, after carrying and shouldering and dragging the past everywhere one goes.

Max, our PoV character, isn't as young as her paper age suggests. All those months-long missions in the past have racked up the miles and the relative years. This mission, the main one of the book, is the dream of her lifetime: Return to Troy, scope it out, and watch it fall. Now, as we're accustomed to in the previous entries in the series, Max and team are not going to go by the book. We know they're on a major and incalculably valuable mission, but we also know that this is St Mary's and there will be surprises.

Yes indeed there are. Throughout the previous books, we've seen the team break the supposedly inviolable rule about interfering in the course of history, and not get squashed flat by History's revenge. Permaybehaps, then, Kleio is aiming them at certain moments to make alterations? It's a thought...but Max, who discovered a HUGE loophole in the theory of history's inviolability in book one, isn't a trusting soul and prefers her trips not to end in death where avoidable. She will not countenance terrifyingly major infractions of the rules. She pays her worst possible price for this uncharacteristic obedience.

But there is always a compensation for caution, aging people's most frequent urging on the young. Her compensation takes the series in a very surprising and new direction.

Now as book four isn't out yet (sob), let me pause here to bitch about a few things. Kalinda Black is first on my list. She's built up as Max's best friend and we see so little of her as to make her invisible. The least she could do is have a few lines here and there! She's only referred to in books two and three. I think that's very mingy.

The redoubtable Mrs Partridge, deployed strategically throughout the series, has a sister in the first book, Mrs De Winter. She vanishes. Given the sisters' ummm ancestry, there isn't *anything* the author could imagine for her to do in other contexts?

The theme I'm developing is one I suspect has led many an author down the path to Book Bloat. These novels are concise. They are lean. Nothing, and I do mean nothing, is overworded in here. Permaybehaps a wee tidge too much conciseness...there is room, while staying on story-line, to give more time to the second-billed cast. The world Taylor is creating is deliciously dotty, so let's see more of it. The serious points Taylor is making aren't going to suffer. I'm not suggesting she Robert-Jordanize the books! Just give us more side views. After all, Max is head of a department, and can reasonably be expected to need to read reports and interview returning staff...can't we eavesdrop?

The technology issues...recording devices that seem way too bulky and cumbersome not least of them...are actually, I think, handwaved away by the ending of this book. But I'll state a bit of it here: In a time-travel-verse that suggests machines simply won't travel if there is an anomaly present in the device, how do high-tech recorders make it back and forth? There have never been lost recorders? They're hand-held! Since all of this travel is to pre-computer eras, why not have something like Google Glass (only without the frames) emitting microwave signals to the pod's hard drive? No worries about competing signals...a wearable hard drive in case they're unable to make contact (though why that would be is unclear to me)...but hand-held recorders in the kind of violent worlds they're visiting seem to me to be very clunky.

These are all cavils. In the main, by the end of this book, I was so sad to see St Mary's in my rear-view mirror (which reminds me, MORE EDDIE!!) that I shed a few more tears than were actually required. The ending will wring tears from you. As hopeful as beginnings always are, they require endings, and those aren't always easy.

And as a side note, does anyone know someone in the development department of the BBC? Or ITV? This is a *perfect* TV show. Like Sliders only smart.

This work is licensed under a Creative Commons Attribution-NonCommercial-ShareAlike 3.0 Unported License.
Posted by Richard at 2:19 PM