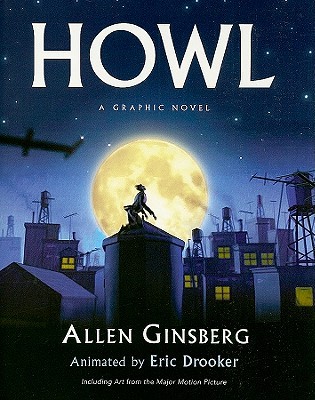 The Publisher Says: First published in 1956, Allen Ginsberg's "Howl" is a prophetic masterpiece--an epic raging against dehumanizing society that overcame censorship trials and obscenity charges to become one of the most widely read poems of the century.

My Review: This comic book...oh dear do pardon, Graphic Novel...was a Yuletide gift, so I sorta hadda look at it and oooh and aaah.

Thing is, I meant it. The film of Howl with yummy-looking intellectual James Franco as Allen wasn't all that well received. I liked it. I thought, long as you're making movies out of poems, why not pick the one that's best in show. Howl is exactly that...a howl...and it's the one incisor left in the toothless, rotted, stinking jaw of modern American poetry.

Ahem. Not that I have a prejudice, you understand.

Drooker's artwork might be familiar to the graphically inclined, and it will please or it won't on its own merits. I happen to like it quite a lot. But the crucial point here is whether the art and the poem mesh, combine, in such a way as to create something that's different from either of the parts, whose sum is greater than the parts by virtue of synchrony.

Yes. Indeed yes. The parts are a lovely object, some pretty artwork, and a major poem of the last century. The sum is a wallop between the eyes with a padded, velvet-covered crowbar.

Finally! A graphique nawvell that's better than a comic book!

This work is licensed under a Creative Commons Attribution-NonCommercial-ShareAlike 3.0 Unported License.
Posted by Richard at 7:24 PM