THE LANTERN by Deborah Lawrenson, lovely but not spooky 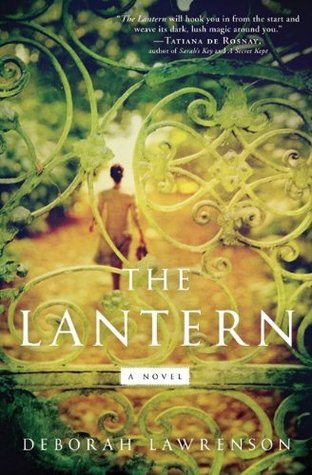 The Publisher Says: A modern gothic novel of love, secrets, and murder—set against the lush backdrop of Provence.

Meeting Dom was the most incredible thing that had ever happened to me. When Eve falls for the secretive, charming Dom in Switzerland, their whirlwind relationship leads them to Les Genévriers, an abandoned house set among the fragrant lavender fields of the South of France. Each enchanting day delivers happy discoveries: hidden chambers, secret vaults, a beautiful wrought-iron lantern. Deeply in love and surrounded by music, books, and the heady summer scents of the French countryside, Eve has never felt more alive.

But with autumn’s arrival the days begin to cool, and so, too, does Dom. Though Eve knows he bears the emotional scars of a failed marriage—one he refuses to talk about—his silence arouses suspicion and uncertainty. The more reticent Dom is to explain, the more Eve becomes obsessed with finding answers—and with unraveling the mystery of his absent, beautiful ex-wife, Rachel.

Like its owner, Les Genévriers is also changing. Bright, warm rooms have turned cold and uninviting; shadows now fall unexpectedly; and Eve senses a presence moving through the garden. Is it a ghost from the past or a manifestation of her current troubles with Dom? Can she trust Dom, or could her life be in danger?

Eve does not know that Les Genévriers has been haunted before. Bénédicte Lincel, the house’s former owner, thrived as a young girl within the rich elements of the landscape: the violets hidden in the woodland, the warm wind through the almond trees. She knew the bitter taste of heartbreak and tragedy—long-buried family secrets and evil deeds that, once unearthed, will hold shocking and unexpected consequences for Eve.

My Review: Nameless Narratrix tells us the tale of woe of loving a man who did Something Awful. She tells us this while living in his Provencal hameau, which is haunted by some dead French people as well as a few living ones. The hameau is crumbling, with plaster and masonry all falling at random times and in random places. The house gives the new couple a gift or two, including an old iron lantern that figures into the sad life story of the last French proprietrix of the hameau. (Have you gone and looked up hameau yet, so I can stop typing the itals?)

There's an absent, though not known to be dead, wife; there's a tale of Love Gone Wrong; there's a lot of carryins-on about people disappearin' right left and through the middle for at least 40 years; there's misunderstanding piled onto miscommunication via idiotic refusals to ask or answer simple, direct, interrogative English-language sentences.

It's Rebecca meets The Horseman on the Roof set in modern times. I found it unspooky in the extreme. I also found it lushly beautifully crafted, line by line. It's gloriously good at evoking Provence, its people, and its tourist-based economy that replaced actual work producing actual, tangible objects. And it should be read with a glass of young and hearty red wine, a plate of orange-butter-herbes-de-Provence Christmas cookies, and a lover of one's preferred configuration at the ready to sate the appetites the book will awake.