BLOOD ON THE TRACKS by Cecelia Holland...the past as prologue, I fear (and I hope) 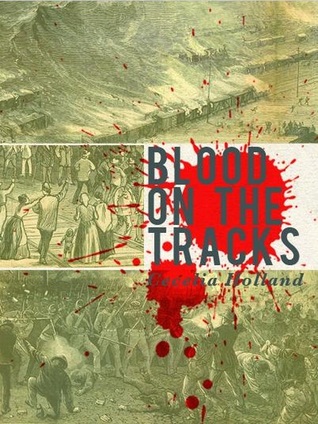 The Publisher Says: The Great Railroad Strike of 1877 wrenched American history onto a new course. Focusing on events in Baltimore and Pittsburgh, this essay brings this dramatic and bloody confrontation to life, as ordinary people, driven to the wall by oppression, rose against their masters. This was the opening act in long years of savage struggle for the rights of labor that continue to this day.

My Review: Holland's historical fiction was my eureka moment of reading about history. The Firedrake, her 1965 novel of the Norman Conquest from the PoV of an Irish mercenary, woke me up as a 12-year-old voracious reader. I knew, from long-ago picture-book reading about the Bayeux Tapestry, that history was a story. That revelation made me an eager reader of all things historical (I checked out the Larousse Encyclopedia of World History so often and for so long that the librarians finally refused it to me!), but it took a novel to raise awareness that history was people's stories, average people, no one "significant" or "important"--just folks. (Specifically, the scene on one of William's ships crossing the Channel where the PoV character pees over the side when he wakes up, how human and familiar is that?)

So I saw this essay as I was browsing the Kindle store, and knowing that Holland had an entire series about the influence of the railroads on 19th-century California, I knew this would be an interesting piece of her research that didn't fit into the books.

Well. I swaNEE, boys and girls, there is interesting and there is interesting and this is the latter. The railroad riots of 1877 had barely been a blip on my mental radar as a part of labor history. (Regular readers of my reviews will recall that my views are to the left of the soulless vampire bastards that create and support the current economic system.) I had no idea of the depths of outrage that sparked this multi-city explosion. This wasn't an orchestrated, ideology-driven rebellion. This was the ultimate expression of individual people's fury and rage at the heartless, soulless exploitation of their labor for the luxury and happiness of a very, very few.

I imagine I could stop there, and most of y'all would understand why I gave the piece four stars.

But the thing that novelists do, even when they venture into non-fiction, is structure reality into a narrative. It's the way humans like to get their information, as witness the existence and survival of narratives from thousands of years ago. "Generals" Brinton and Pearson, leaders of militias called upon to suppress the rioting in Pittsburgh, were polar opposites in their approaches to the situation. Pearson's local Pittsburgh militia had a strong base of local knowledge and Pearson himself was one of the few actors in the drama with a shred of common sense. Naturally, he was sidelined and ultimately sent home. Brinton, a Philadelphia import to the scene, was by-the-book and inflexible...until shit got real and people started fighting in earnest. His men were the only ones to shoot to kill.

That did not end well.

Pittsburgh blew up, fires were set, bystanders...a four-year-old girl among them...died. This was in defense of bosses who had cut working men's wages ten percent, and announced that labor cuts were imminent. Pronunicamentoes proclaimed from the luxury of their fabulously well-appointed private rail cars. Baltimore had similar events, though for a shorter time. Martinsburg, West Virginia, where the crisis began, fared slightly better. But all were railroad towns and each had a large population sacrificed to the larger profits paid to a very few.

And this all takes place against the backdrop of an economy in free-fall from the Panic of 1873, unaided by the scandal- and corruption-plagued Federal Government, and record-breaking profits for the wealthiest. Does this have a revoltingly familiar sound? People made homeless, left to starve, unable to find any work ringing bells too?

Holland's point is simple: Every time capital is left without strong and painful chains, people suffer. We forget or ignore this lesson to our societal cost, and we're paying that cost yet again.

Read this historical essay. Then think about the events in Greece. In Ukraine. The Occupy movement. Just for a moment, one small shining moment, THINK ABOUT SOMEONE ELSE.

This work is licensed under a Creative Commons Attribution-NonCommercial-ShareAlike 3.0 Unported License.
Posted by Richard at 12:11 PM