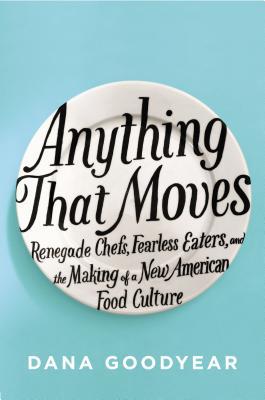 The Publisher Says: A new American cuisine is forming. Animals never before considered or long since forgotten are emerging as delicacies. Parts that used to be for scrap are centerpieces. Ash and hay are fashionable ingredients, and you pay handsomely to breathe flavored air. Going out to a nice dinner now often precipitates a confrontation with a fundamental question: Is that food?

Dana Goodyear’s anticipated debut, Anything That Moves, is simultaneously a humorous adventure, a behind-the-scenes look at, and an attempt to understand the implications of the way we eat. This is a universe populated by insect-eaters and blood drinkers, avant-garde chefs who make food out of roadside leaves and wood, and others who serve endangered species and Schedule I drugs—a cast of characters, in other words, who flirt with danger, taboo, and disgust in pursuit of the sublime. Behind them is an intricate network of scavengers, dealers, and pitchmen responsible for introducing the rare and exotic into the marketplace. This is the fringe of the modern American meal, but to judge from history, it will not be long before it reaches the family table.

Anything That Moves is a highly entertaining, revelatory look into the raucous, strange, fascinatingly complex world of contemporary American food culture, and the places where the extreme is bleeding into the mainstream.

There is stuff that these damnfool eejits are *paying*money*for* that there is not a single, solitary, remote, fat, or slim chance that I would consent to sit at a table with, still less eat.

Actually, I could stop there and the review would be complete. But there's a bit more I'd like to say. Dana Goodyear writes for The New Yorker, and it shows. Her phrases are often quite euphonious, but in the end more snacklike than mealtimey:


Appetites are hard to legislate, and people usually end up doing what they want to do. The year {Upton} Sinclair wrote The Jungle, he got his first summer cold. It was the beginning of the score of ailments that led him to John Henry Kellogg's Battle Creek Sanitarium (sic), which promoted vegetarianism, and to the writings of Horace Fletcher, "The Great Masticator," who prescribed chewing your food extra-thoroughly.

I stopped subscribing to The New Yorker for that reason. Okay, back in the Shawn era we had them memorable 10,000 words on zinc, its extraction, refinement, and many uses. But now we have ephemeral, mildly interesting stuff like...

...and there you have it. The chapters in this book could have been entitled "Notes from LA" and I would've skipped gaily past them, being largely uninterested in when not actively hostile to LA. And I would've been not one smidgin less well-rounded a person.

Goodyear's entertaining moments describing the feuds and rivalres among these freaky-deaky foodies are pleasant enough. Her description of eating some of the offal these folks consume made me mildly queasy, and never...not once...made me curious enough to try some of the disgusting crap the effete of palate and overloaded of wallet gourmands herein profiled savored.

I received this copy from the publisher via LibraryThing's Early Reviewers program. That made this review possible for me to write without resorting to invective, vituperation, and contumely. Had I spent $27.95 on it, I''d be so moltenly angry even yet that it would be unwise to approach me without something normal and wholesome like a double cheesburger with bacon, mayo, and onions plus an extra-large fries prominently displayed as a token of goodwill.

Make that burger a triple.