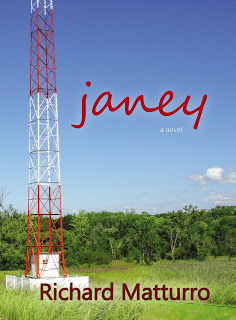 The Publisher Says: The Twelve Labors of Hercules might seem an easier task than warming up to someone as caustic and misanthropic as Janey. If you hate her at the beginning, though, be warned: by the end you may very well fall in love with her.

Richard Matturro (author of four previous novels: Leslie, Luna, Perseus, and Troy) is a native of Rye, New York. He holds a doctorate in English with a specialization in Shakespeare and Greek Mythology. After sixteen years at the Albany Times Union, he now teaches literature in the English Department at the University of Albany, and lives on an old farm in the foothills of the Berkshires.


My Review: Author Matturro wrote three previous novels that were takes on classical subjects, and now gives us misery-guts Janey Heracles, a sculptress (she'd smack me one for saying that) and a general all-around Pain In The Ass of a woman. For those Louise Penny fans out there, think Louise Penny's deathless old-lady-with-a-tude Ruth Zardo before menopause calmed her caustic wit down.

No, no lie not kidding not exaggerating. Serious.

Janey's Twelve Labors are nothing short of reinventing herself in her late forties. She's got a great gallery show to prepare a piece for, but to navigate her way to that Promised Land, she must unload her literal and metaphorical baggage: Sell the empty hotel her dead parents left to her and her conventional, estrangedish sister Laura; empty the said hotel of its Augean Stables-level hoarded crap; cope with her husband divorcing her; cope with a new man, DJ Bugs Mudge, bringing his gray-ponytail-having gerontological tantric sex and laid-backness into her life; cope with Stanley the Evil Gay Imp in whose adjacent studio to hers he makes paintings of naked boys that bring him, well, something he wants...but not enough to keep him from renaming himself Stanislav. Which Janey, with her usual People Person attitude, ignores and calls him, at every opportunity, Stanley.

I found the author's breaking the book into twelve two-chapter segments named after the Twelve Labors of myth a wee bit forced, but I think for many it might be a useful way of calling attention to the point of the book: Janey is, like her namesake, laboring mightily (if in her case more than a little unwillingly and for no clearly defined purpose) to master and contain her own power, her self-transformation, her life.

In a “review” of Janey's sculpture Pillars, created for her big gallery show, author Matturro sums up Janey's journey, and a fundamental insight into human nature and life results:


The Ionic column is polished smooth and gleaming white. The Doric is discolored, stained, chipped, and pockmarked, the object of a thousand injuries and indignities. Worse, there's a diagonal crack that threatens at any moment to split it in two. ...these are the dual natures we all share after a certain age. That ideal, upright pillar we wish we were, and that damaged, blemished old post that we are. And yet one is as necessary as the other for our “life support.”

...Art indeed may not change anything, and yet on some very basic level, life is insupportable without it.

(p183, softcover edition)
A very nicely phrased way to say something that, as readers, I suspect we all agree with; and as good a summation of the reasons one would want to read this novel as any I can write. I recommend the book to your readerly mercies.
Posted by Richard at 4:00 AM