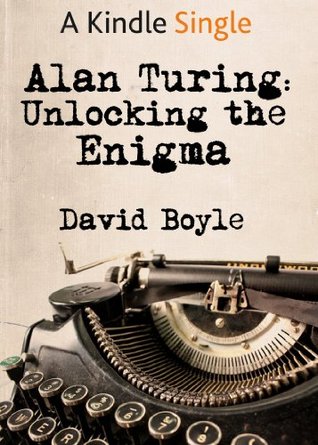 Mathematician, philosopher, codebreaker, a founder of computer science, and the father of Artificial Intelligence, Turing was one of the most original thinkers of the last century - and the man whose work helped create the computer-driven world we now inhabit.

But he was also an enigmatic figure, deeply reticent yet also strikingly naïve. Turing’s openness about his homosexuality at a time when it was an imprisonable offense ultimately led to his untimely death at the age of only forty-one.

In Alan Turing: Unlocking the Enigma, David Boyle reveals the mysteries behind the man and his remarkable career. Aged just 22, Turing was elected a fellow at King's College, Cambridge on the strength of a dissertation in which he proved the central limit theorem. By the age of 33, he had been awarded the OBE by King George VI for his wartime services: Turing was instrumental in cracking the Nazi Enigma machines at the top secret code breaking establishment at Bletchley Park during the Second World War.

But his achievements were to be tragically overshadowed by the paranoia of the post-War years. Hounded for his supposedly subversive views and for his sexuality, Turing was prosecuted in 1952, and forced to accept the humiliation of hormone treatment to avoid a prison sentence. Just two years later, at the age of 41 he was dead. The verdict: cyanide poisoning.

Was Turing’s death accidental as his mother always claimed? Or did persistent persecution drive him to take him own life?

Alan Turing: Unlocking the Enigma seeks to find the man behind the science, illuminating the life of a person who is still a shadowy presence behind his brilliant achievements.

My Review: As a stated goal, "seeks to find the man behind the science, illuminating the life of a person who is still a shadowy presence behind his brilliant achievements" is one that goes largely unmet. Well, almost entirely unmet. In approximately 65pp, there's no room for that.

So why say it? Because the author wanted to write ABOUT Turing, not OF Turing. What he accomplished in 41 years is amazing. A normal biography is going to stress the parts of his life that biographers can reach, the achievements and the facts behind his spectacular fall.

Writing about Turing is exploring, with whatever factual fig-leafs one can find and apply, his life and his feelings, to the extent one can ever do this with another person. So we get very little of anything new. There are no unplumbed sources newly revealed. There are no as-yet-uninterviewed colleagues or old loves still living. So the book is a competent rehash of the man's life and work, a good fast overview of a fascinating human being, and all done in time for the announced posthumous pardon granted to Turing.

The cold fact is that no one wanted to grant a posthumous pardon to him for the "crime" of being queer. It would open up so many old cases of people convicted under the same revolting law, over 50,000 of them, and think of the bureaucratic horrors of that. What made the Tory government change its mind? A Liberal Democrat peer introduced legislation to force the gummint to issue pardons and void the conviction of all the men now dead who were convicted. It was going to pass, and ye gawds what a kettle of fish that would be.

One Royal Pardon comin' up. Strictly limited to one person, worded carefully, and ever so pusillanimously vilely bureacratically sound. Nauseating.

Lord Quirk, of whom I have never heard before this good moment, said it best:


I end by noting something surely perverse, if constitutionally sound enough, about this bill...It would grant Alan a pardon, when surely all of us would far prefer to receive a pardon from him.