BEASTS OF NO NATION, art of a high order and indictment of an entire species 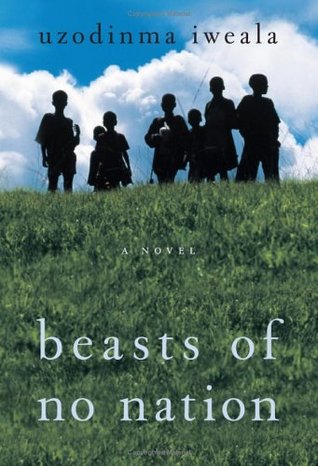 The Publisher Says: In this stunning debut novel, Agu, a young boy in an unnamed West African nation, is recruited into a unit of guerrilla fighters as civil war engulfs his country. Haunted by his father's own death at the hands of militants, Agu is vulnerable to the dangerous yet paternal nature of his new commander. While the war rages on, Agu becomes increasingly divorced from the life he had known before the conflict started a life of school friends, church services, and time with his family still intact.

My Review: Men writing in the voice of a child are at a disadvantage because childhood is traditionally thought of as a woman's preserve. Iweala writes about a boy who is only nominally a child, though; one of the thousands of boys who are compelled to serve in the civil wars and rebellions of Africa's troubled states.

He does this with force, beauty, and horror.

This moment is the narrator's first moment of joy:


Nobody is seeing me as I am getting up and walking through the tree right to the road. I am feeling breezes to my back that is pushing me to walk far far away from here and I am moving quickly quickly onto the road where I am just walking walking walking to where the sun is setting. I am looking at it and wanting to catch it in my hand to be squeezing until the color are dripping out from it forever. That way everywhere it is always dark and nobody is ever having to see any of the terrible thing that is happening in this world.

I can't stress enough that this first novel is To Be Read! The passage above, in the context of the story, brought me to tears. It's a lovely piece of writing no matter what...but coming where it does in this wrenchingly infuriating story, it's got a wallop that must be experienced.

Beasts of No Nation was published in 2005. It's written by a Nigerian man of (then) some 23 years of age. Jamaica Kincaid acted as his advisor. Someone explain to me, that all being said, why the Adichie (of similar background and age) cult got rollin' and there was not an Iweala cult...?

This author deserves your attention. Please read his work. It's not flawless, but it's head and shoulders above most things that clutter our shelves!