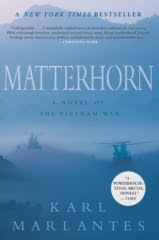 Rating: 5* of five, but it deserves six

The Publisher Says: Intense, powerful, and compelling, Matterhorn is an epic war novel in the tradition of Norman Mailer's The Naked and the Dead and James Jones's The Thin Red Line. It is the timeless story of a young Marine lieutenant, Waino Mellas, and his comrades in Bravo Company, who are dropped into the mountain jungle of Vietnam as boys and forced to fight their way into manhood. Standing in their way are not merely the North Vietnamese but also monsoon rain and mud, leeches and tigers, disease and malnutrition. Almost as daunting, it turns out, are the obstacles they discover between each other: racial tension, competing ambitions, and duplicitous superior officers. But when the company finds itself surrounded and outnumbered by a massive enemy regiment, the Marines are thrust into the raw and all-consuming terror of combat. The experience will change them forever.

Marlantes was a Marine in Vietnam. He took thirty years...longer than most of this planet's people have been alive...to bring forth this horrifying, harrowing, agonizing artwork. I expect we will not see another book from him, or if we do, it will be so radically different from this one as to be unrecognizable as created in the same brain.

The pain and the horror are obviously not going to let him go. He's exorcised them as best a man can in writing this book. But I don't feel a sense of relief at the end of this book. I don't finish up when he stops writing. I think that's because the experience of reading this book is so shattering. OBVIOUSLY! OBVIOUSLY!! it's no smallest patch on actually living this book, but it's a rare experience to read something so complete, so clearly delineated in its scope and its purpose, and that has power...ask a demolitions person about the power of an explosion contained in a box...but more than that, it has purpose. I don't know Marlantes. I don't know that I want to. I know enough about him after reading this book to hate the idea of sending kids across oceans to kill other human beings before I think they're even ready to *love* other human beings, because so many of them won't live to become the man he has.

I hate that fact so much that I hurt inside. I want to scream and cry and rage and mourn and weep with the mothers and fathers whose souls are now scarred and deformed by the pain of losing a child. It won't help, they're launched on a horrible personal journey, but GODDAM IT they're people whose lives changed forever because of some stupid slogan like "national interest."

So, what has Marlantes wrought? A long, hard journey of a book that millions will read some of, and back away scared...be one of the few who go the distance, and you will never, ever forget the journey or the guide. Worth it.
Posted by Richard at 1:33 PM