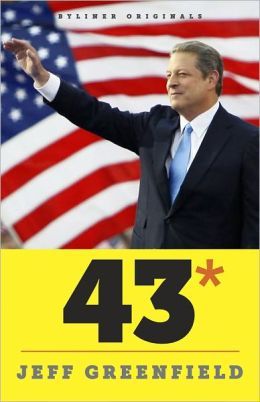 The Publisher Says: At 5:00 p.m. on September 11, 2001, an ashen-faced but composed President Al Gore stepped into the East Room of the White House to deliver a televised address to the nation. With him were former presidents Clinton and Bush, as well as Texas governor George W. Bush—flown to Washington from Dallas on a military jet, his first visit back to the capital after the close race that lost him the presidency just months before.

That’s not how you remember it?

Imagine if the 2000 presidential election had turned out differently and Al Gore had defeated George W. Bush to become the 43rd president of the United States. How might events have played out? Would Osama bin Laden have loomed as large? Would the 9/11 attacks have been even worse? Would we have invaded Iraq? Would the economy have plunged into recession?

This is the provocative alternate universe of 43*, a riveting thriller by veteran political commentator Jeff Greenfield. Richly reported and anchored in actual events, 43*: When Gore Beat Bush is the fascinating follow-up to Greenfield’s bestselling Then Everything Changed, which imagined what-if scenarios for the Kennedy, Ford, Carter, and Reagan administrations.

Greenfield takes readers deep inside the Gore administration and reveals high-level meetings, top-secret programs, and ego-fueled battles that forever altered the global landscape. And in Greenfield’s hauntingly plausible parallel universe, the law of unintended consequences has a dramatic effect on the fate of the United States.

“It’s the ‘butterfly effect,’” writes Greenfield, “where one dead butterfly millions of years ago leads to a contemporary world immeasurably more coarse, less kind. It’s the notion of the old nursery rhyme: ‘For want of a nail the kingdom was lost.’”

My Review: I'll lead off with the fact that I agree with Greenfield's central premise: No way in HELL was a Gore presidency going to be an easy and smooth continuation of Clinton's easy and smooth presidency. (pause for hilarious laughter) Lieberman was a stupid, bad choice for veep; Gore himself was visibly annoyed by the process of campaigning on an even footing with that simpering chimp, and it showed; and perhaps most tellingly, Gore is a smart man, and Murrikinz hates them some smart folk. Lookit what happened to that nice perfesser dude in the 1950s. (Adlai Stevenson, for the furriners and nursery crowd.)

Rep. Tom DeLay would've been a freakin' nightmare opponent as Speaker-in-fact, Sen. Jesse Helms, well, let's just say there's some folks for whom death is too good, and on and on and on. This is matched against Gore's clear strengths: at that time, 25 years in Washington as an elected official, a lifetime in politics via his daddy's Senate life, a pretty blonde wife with some wingnutty ideas about free speech that would've played well in the shitty little GOP burgs that, for some reason, haven't been ethnically cleansed. Proof positive there is no vast left-wing conspiracy, that.

And while I agree that Gore's proven effectiveness at knocking heads saved the 1996 Olympics, I don't agree with Mr. Greenfield's assessment that a Gore presidency would've been ineffective at doing much the same in DC's intelligence community. I suspect that Mr. Greenfield had excellent reasons for his choice...read the Acknowledgments, man's up on this stuff...but I dunno, this seems an easy-to-write choice, not an inevitable one. Like the millionaire tax-free battle. Like the dot-bust. Due attention is paid to the screaming rooms at Faux News and on Wingnut Central Raddee-O-Land, and their entrenched right-wing insane clown posse. These would've made Gore's life hell, as they have Obama's. Like enough, they'd've been even more strident under Gore because of their sense of outrage: He's one of us and he's not twangin' the Teabilly Horst Wessel!

Whatever my cavils about that, let me assure you the piece is well-written and contains the trademark Greenfield slyness. Moments of savorable irony for political junkies are placed hither, thither, and yon, but those without the information needed to appreciate them won't feel a sharp whizz as the ninja star slices their hair-do.

So why the mingy three-and-a-half of five rating? Because, in the end, I felt I was being in-the-roomed. I was too close to the trees and I wanted a look at the forest. Now a big part of that is the length of the piece, at under 100pp. Can't do it all, after all, when you're aiming at the lunch-plus-commute reader. But it's more than that. Greenfield knows a lot more than I do about his subject. He's telling his own story, and it's got plausibility everywhere and everywhen. So why is it that I can purse my lips and shake my head and wonder what makes you think that follows from this other thing? Just working from his own data presented in the piece, I wasn't as sold as I expected to be.

But I was sold enough to say this to you: Spend $1.99 on this Kindle Single and you'll have ~2hrs tops of well-crafted, thought-provoking, and ultimately satisfying counterfactual fun.