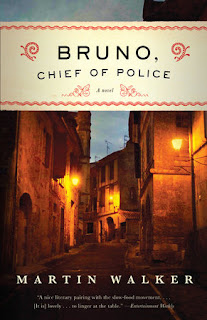 The Publisher Says: The first installment in a wonderful new series that follows the exploits of Benoît Courrèges, a policeman in a small French village where the rituals of the café still rule. Bruno—as he is affectionately nicknamed—may be the town’s only municipal policeman, but in the hearts and minds of its denizens, he is chief of police.

Bruno is a former soldier who has embraced the pleasures and slow rhythms of country life–living in his restored shepherd’s cottage; patronizing the weekly market; sparring with, and basically ignoring, the European Union bureaucrats from Brussels. He has a gun but never wears it; he has the power to arrest but never uses it. But then the murder of an elderly North African who fought in the French army changes everything and galvanizes Bruno’s attention: the man was found with a swastika carved into his chest.

Because of the case’s potential political ramifications, a young policewoman is sent from Paris to aid Bruno with his investigation. The two immediately suspect militants from the anti-immigrant National Front, but when a visiting scholar helps to untangle the dead man’s past, Bruno’s suspicions turn toward a more complex motive. His investigation draws him into one of the darkest chapters of French history—World War II, a time of terror and betrayal that set brother against brother. Bruno soon discovers that even his seemingly perfect corner of la belle France is not exempt from that period’s sinister legacy.

My Review: First in a series! Words to gladden a satisfied mystery reader’s heart. First in a cozy series set in a French village. First in a series featuring a male lead who loves kids, works his land and his job, has lovers (women, boringly enough), and commands the respect of his entire territory by being unflashily committed to justice, even when the law is in conflict with it.

Bruno is a very good man, one who did everything he could to save the life of the woman he loved in the Bosnian war, and still failed; he’s a damaged man, and he would be the first to say so; but he never once puts a foot wrong in dealing with the souls in his care. We meet him, in fact, helping the local farmers evade the stifling EU bureaucrats bent on enforcing health codes that simply don’t apply to the ancient market town of St-Denis. Any wonder everyone loves him?

So a murder occurs, one that Bruno can’t hope to handle solo: An elderly Algerian immigrant, veteran of the French Army and holder of the Croix de Guerre, appears to be the victim of a far-right racist hate crime. Things don’t look good for the town’s small Algerian community’s peace of mind, but the trail of evidence developed by Bruno with his colleagues from the various and confusingly similar French policing agencies lead them to an unexpected resolution to the crime. What makes that so satisfying isn’t that it was a surprise, which it was not about halfway into the book, but that it was handled with the tact, grace, and dedication to justice that make cozy mysteries satisfying.

There is food, there is wine, there is a dog, there are no cats...it is as if Walker went over my personal checklist and gave me all but one thing on it (Bruno’s straight). I’m okay with that. But most of all, Walker gave Bruno wonderful people to work with, people whose deep and dense roots are charmingly intertwined and wonderfully deftly worked into the narrative. Infodumps are rarely this good. It is a major plus for the series, always assuming it continues.

I can’t quite get to four stars for the book, though, because it’s atmospheric and delightful, but not quite suspenseful enough. The author tips his hand more than forty pages before the end of the book. Okay, yes, it’s a first mystery, but I think a little more care could have gone into the Big Reveal. It’s only a quarter star knockdown because the Big Reveal is a very very surprising facet of French history I hadn’t so much as heard tell of before, and that’s worth a lot of pleasure points. The red herring wasn’t quite all I’d hoped for either, leading nowhere a lot sooner than I would have expected. Again it was interesting, and it cast a bit of light on my idea of the EU’s cultural landscape from a new angle. But it was just this side of perfunctory in its use.

All the cavils aside, the book is a pleasure to read, and the series will be one I follow for at least a few more outings, possibly much longer.
Posted by Richard at 4:00 AM