SOLO by Rana Dasgupta...lovely and unsettling, unnerving and deeply satisfying 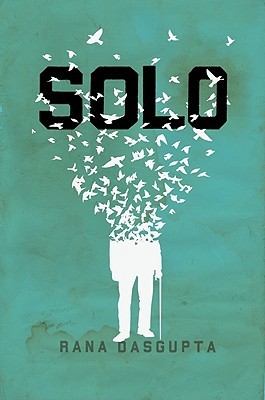 The Publisher Says: With an imaginative audacity and lyrical brilliance that puts him in the company of David Mitchell and Alexander Hemon, Rana Dasgupta paints a portrait of a century though the story of a hundred-year-old blind Bulgarian man in a first novel that announces the arrival of an exhilarating new voice in fiction.

In the first movement of Solo we meet Ulrich, the son of a railroad engineer, who has two great passions: the violin and chemistry. Denied the first by his father, he leaves for the Berlin of Einstein and Fritz Haber to study the latter. His studies are cut short when his father’s fortune evaporates, and he must return to Sofia to look after his parents. He never leaves Bulgaria again. Except in his daydreams--and it is those dreams we enter in the volatile second half of the book. In a radical leap from past to present, from life lived to life imagined, Dasgupta follows Ulrich’s fantasy children, born of communism but making their way into a post-communist world of celebrity and violence.

Intertwining science and heartbreak, the old world and the new, the real and imagined, Solo is a virtuoso work.

My Review: It's very tough to reduce this book to a synopsis. Ulrich, born in the dawning years of the 20th century in Sofia, Bulgaria, is the thwarted and stunted son of a Germanophile railway engineer. His Philistine father and dreamy mother battle their lives away, not listening or hearing or caring; they end up deaf. Ulrich ends up unable to feel, to engage with life, or to make sense of the world. His wife and son vanish; his career grows ever thicker and more ungainly to fill the space; then, one day, it too vanishes. What he is left with, after a lifetime of failure and eventual blindness, is...space. He is a void encompassed by flesh. He is one hundred when we meet him. His slow, exquisite dis-integration is the resolution of the story of his life...it is the final act of a mind unable to bear frictionless, affectless existence one more second.

It is beautiful. Rana Dasgupta, the author of Solo, is only now forty. I hate his skinny ass. This is the book James Joyce would've written if he'd ever found his way past the success of the tedious and pretentious Ulysses. And here this guy with a short story collection under his belt unrolls this gorgeous Caucasian carpet of a book before he's forty! Hate is so mild a term for the envious longing and shivering, ecstatic loathing that possesses me as I read his sentences, and twine myself about his fractal geometry of a story.

Rather than try to make things clear to you myself, let me quote to you from pp334-335 of the book:


"He was like the other half of myself," says Boris...Ulrich says, "You haven't lost {him}, you know. I don't know if it helps to say that. I lost a friend once myself, and I know how it goes.
"He'll find his way inside you, and you'll carry him onward. Behind your heartbeat, you'll hear another one, faint and out of step. People will say you are speaking his opinons, or your hair has turned like his.
"There are no more facts about him -- that part is over. Now is the time for essential things...Gradually you'll grow older than him, and love him as your son.
"You'll live astride the line that separates life from death. You'll become experienced in the wisdom of grief. You won't wait until people die to grieve for them; you'll give them their grief while they are still alive, for then judgment falls away, and there remains only the miracle of being."

In reading that passage again, I feel like Annie Dillard's bell..."it was as though I had lived my entire life as a bell and never known it until I was struck"...and I finally unraveled the book I'd read: Meditation on failure and grief? No; not that; a more subtle and wonderful thing: Like "The Love Song of J. Alfred Prufrock", a shout in the face of closed minds to open, to live, to exist fully if only for one glittering moment.
Posted by Richard at 4:00 AM