Revisiting THE ELEGANCE OF THE HEDGEHOG by Muriel Barbery 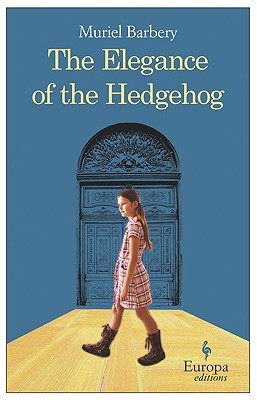 The Publisher Says: We are in the center of Paris, in an elegant apartment building inhabited by bourgeois families. Renée, the concierge, is witness to the lavish but vacuous lives of her numerous employers. Outwardly she conforms to every stereotype of the concierge: fat, cantankerous, addicted to television. Yet, unbeknownst to her employers, Renée is a cultured autodidact who adores art, philosophy, music, and Japanese culture. With humor and intelligence she scrutinizes the lives of the building's tenants, who for their part are barely aware of her existence.

Then there's Paloma, a twelve-year-old genius. She is the daughter of a tedious parliamentarian, a talented and startlingly lucid child who has decided to end her life on the sixteenth of June, her thirteenth birthday. Until then she will continue behaving as everyone expects her to behave: a mediocre pre-teen high on adolescent subculture, a good but not an outstanding student, an obedient if obstinate daughter.

Paloma and Renée hide both their true talents and their finest qualities from a world they suspect cannot or will not appreciate them. They discover their kindred souls when a wealthy Japanese man named Ozu arrives in the building. Only he is able to gain Paloma's trust and to see through Renée's timeworn disguise to the secret that haunts her. This is a moving, funny, triumphant novel that exalts the quiet victories of the inconspicuous among us.

My Review: This book is a delightful disappointment, a hugely successful failure, a predictable page-turner.

Since I read a translation by novelist Alison Anderson, whose own novel Hidden Latitudes I read ten or so years ago and quite liked, any comment I make on the writing of this book is misplaced. I don't know what Muriel Barbery's writing is like. I know that Barbery is well served by her translator. Anderson presents us with a text whose twining first-person narratives rather resemble the narrative technique she used in Hidden Latitudes to tell Amelia Earhart's imagined life stranded on a desert island.

What do Paloma, a twelve-year-old child of privilege and Renée, a fifty-four-year-old daughter of poverty have in common? The novel sets out to define their commonality of cause and kinship. That they are sisters under the skin is a set-piece of the book from the start. This really isn't good news, since the characters are not necessarily best understood as being in tandem; they share one central characteristic that organizes each one's life: They hide. Hiding from others, the masks required of those who are different from the norm, this rich seam is well and fully explored in this novel. It is even over-explored. Perhaps “beaten half to death” would be the way to say it. Paloma is far smarter than her elegant Parisian power-couple parents or her very bright (in an average sort of way) college-student sister. She begins her journey through the pages by announcing that, on her next birthday, she will commit suicide and simultaneously burn her home down. Adolescent angst, oh goody, was my first thought. Little Paloma with no problemas wants to kill herself, well sugar, go do that and leave old man Richard alone. Little by little, Paloma records in her two journals the few things she can find in her little world that make life worth living. It is these reflections and observations that make the meat of the book, that give us enough insight into this young person's development to make reading her philosophical ramblings worth the time and effort.

Renée, the adult in the piece, is even less obviously sympathetic; she's decided to hide her intelligence and be, to all outward appearances, the typical working-class occupant of a concierge's loge. She isn't that at all, and she reports to us in her first-person narration that she has no respect for those who employ her since they are so easily fooled into believing her crafted image. So far, so average. What makes this book's whole greater than the sum of its parts is the quality of the philosophical musings the two characters indulge in; they are very well worth the time to read.

I can't say I was happy with the ending of this book and I was distinctly irked by the revelation of the Great Buried Secret in Renée's past, it seemed so pat and contrived and predictable. Paloma's plot line resolves in a great whoosh of predictability, too. But this is a book that uses the formula (loners are people, too! Loneliness is bad! Look around you, there are treasures on every doorstep!) to a very satisfying-to-read end. On balance, recommended reading for anyone who likes underdog stories, and who has an interest in philosophical musings. Worth a read for anyone who simply wants to pass a few pleasant hours. Avoid at all costs if happy endings are the only ones you like. Don't bother with the book if you are looking for any sort of challenge in the reading or the thinking you'll do here.