WAKULLA SPRINGS, a novella up for a Nebula...rich and atmospheric and good fun 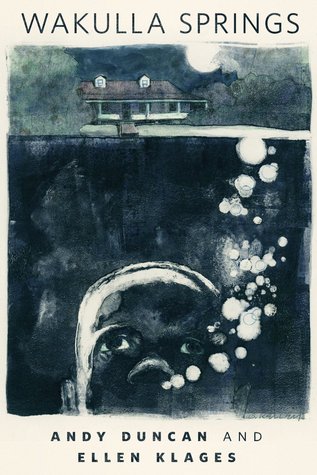 The Publisher Says: Wakulla Springs, in the deep jungle of the Florida panhandle, is the deepest submerged freshwater cave system in the world. In its unfathomable depths, a variety of curious creatures have left a record of their coming, of their struggle to survive, and of their eventual end. And that's just the local human beings over the last seventy-five years. Then there are the prehistoric creatures...and, just maybe, something else.

Ranging from the late 1930s to the present day, Wakulla Springs is a tour de force of the human, the strange, and the miraculous.

At the publisher's request, this title is being sold without Digital Rights Management software (DRM) applied.

My Review: This novella, approximately 99 pages, is free because it's nominated for a 2014 Nebula award. While I liked the story a lot, and saw the good writing and the deft plotting, I don't see how on earth it's SFnal.

I was very taken with the multi-generational premise. We travel from mother to son to granddaughter to mother again, and that kind of structure mirrors many of my experiences of the world: We frequently return to origin points to discover, to nourish, to measure ourselves against a yardstick we know others in our personal world have used before us. The fact that the yardstick is Olde Tyme Movies made it more fun for me. I like the 1930s and 1940s B-movies because, like TV shows in our day and age, they represent the low culture, the mass market, the common sensibility of their time. It's fascinating to compare the bugaboos and the stereotypes of those times to our own times.

So as we visit the deeply circumscribed world of African-American women under Jim Crow laws, moving to the early civil rights struggle, and finally to the modern era's deep concern with the environment...the highlights of the past 75 years...I was carried along as characters I liked and admired did their best and lived their lives and made their peace with what life handed them, and made the best and the most of what that had to offer.

At novella length, there isn't room to do much more than rough in the kind of shades and shadows that make a novel such a satisfying read. The authors did a very good job of this indeed.


The last of the sun touched the very tops of the trees; everything else was shadows. Then even that light faded, the blue of the sky deepened, and the stars began to wink on. The moon rose over a bend in the river, and a trickle of white light made a river of its own, sparkling down the middle of the dark water.
All around her the grass and trees were a-hum with the soft shirring of unseen creatures. Mayola remembered what Odell had said in his tourist voice, about the fairies that lived deep below in the springs. In the daylight, she had known it for a tale, but now it seemed like it might really be true.

But the form "novella" means, by definition, less room to maneuver, and so these moments are like Florida's hammocks...bits of solid land amid a watery world. The trip is an eventful one, like any visit to an untamed landscape is. The events aren't all equal heights, either. They shouldn't be, of course, but the abandonment of the setting so lovingly described for the built environment, and not the nice part of it, in Los Angeles feels like the brakes of a jetliner do when you're landing in one: crunchbouncebouncescreeeeeeeewhoooooompaaaannnnnd stop. When the shift happened, I mentally dropped the book to three stars in sheer annoyance.

I was grudgingly adding back a half-star for the authors' continuing to follow the thread of monster-movie/Hollywood film/civil rights, in spite of the annoyance I felt at the change of scene, when the last chapter came along and back I was in Wakulla Springs.

And the ending itself, the last paragraph of the tale, left me with a smile and an appreciative murmur of praise. Don't read this paragraph if you're spoilerphobic:


And beneath the river's surface, a creature reached for Anna's boat with a webbed hand, its talons approaching the metal hull. The it changed its mind and kicked away, back down into the depths where it dwelled, away from the light.

That's a very apt, fitting, suitable ending for this tale of place and personhood and the world's infinite mystery. For all we look and study and learn and classify, there's always a deep place that is itself, and not ours nor any of our kind's business.

This work is licensed under a Creative Commons Attribution-NonCommercial-ShareAlike 3.0 Unported License.
Posted by Richard at 2:42 PM