IF KENNEDY LIVED by Jeff Greenfield, a Political Fantasia 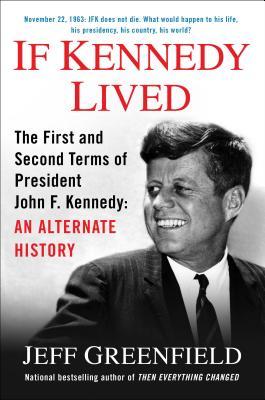 The Publisher Says: November 22, 1963: JFK does not die. What would happen to his life, his presidency, his country, his world?

Based on memoirs, histories, oral histories, fresh reporting, and his own knowledge of the players, this book looks at the tiny hinges of history—and the extraordinary changes that would have resulted if they had gone another way.

Now he presents his most compelling narrative of all about the historical event that has riveted us for fifty years. What if Kennedy were not killed that fateful day? What would the 1964 campaign have looked like? Would changes have been made to the ticket? How would Kennedy, in his second term, have approached Vietnam, civil rights, the Cold War? With Hoover as an enemy, would his indiscreet private life finally have become public? Would his health issues have become so severe as to literally cripple his presidency? And what small turns of fate in the days and years before Dallas might have kept him from ever reaching the White House in the first place?

As with Then Everything Changed, the answers Greenfield provides and the scenarios he develops are startlingly realistic, rich in detail, shocking in their projections, but always deeply, remarkably plausible. It is a tour de force of American political history.

My Review: See all those questions in the publisher's copy above? Those are the very ones that Jeff Greenfield, a pundit and powerful columnist, addresses with a great deal of panache and a large helping of nerve. Greenfield was often seen on Nightline during its glory years as THE political chat show.

Greenfield graduated with a JD from Yale before going to work for Sen. Robert F. Kennedy after the president was assassinated. That in mind, imagine my surprise when RFK comes across as a really vicious, very nasty character in this telling of his brother's presidency. Apparently he was no saint. But then again, neither was Jack, as we all now know.

What makes me most happy about this book is its major weakness: If you're not conversant with the politics and personalities of that day, this book will read like a fairly dry novel. Without knowing the name McGeorge Bundy, for example, there's not much point in picking up the book. Better yet, if the name carries with it an image of hornrims and a honking accent, the book will light a little Eternal Flame for Camelot.

And for my own part, I'd LOVE to have seen what Vaughn Meader would've done with a second term! (Yes, I know that went whoooshing over a lot of non-gray heads. So will the rest of the book.)

So why give the serviceable, journalistic prose four stars? Because the prose isn't the point. The tale, the imagining of JFK fighting and winning a very different 1964 election battle and doing so much damage to his own interests...that is what people with memories of that horrible, horrible moment in time when our president was murdered before our horrified eyes would pay the $12.99 for a Kindle copy, or $26.95 for a hardcover version of the book to experience.