IT CAME! (that's the title, honest) 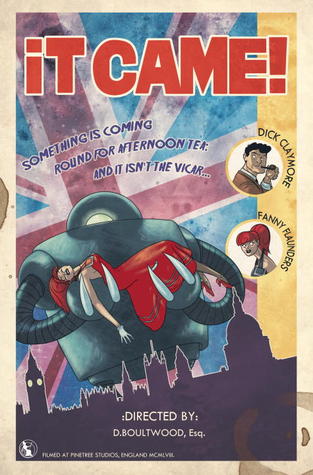 The Publisher Says: 1958. Driving through the British countryside, unthinkingly misogynistic space scientist, Dr. Boy Brett, and his companion, Doris Night, pop into a quaint village pub for a cheese ploughman's...

But waiting for them outside is a most unwelcome visitor: Grurk, an indestructible, monosyllabic robot from outer space, on a mission to harvest the British Blitz spirit for energy!

Pursuing Grurk in their Morris Minor, will Boy and Doris be able to save the British from a life without stiff upper lippedness, or will Her Majesty's Kingdom be forever resigned to a life down in the mouth?

Witty, satirical and a rollicking good laugh, IT CAME! is a stunning piece of work, infusing the best (and worst!) bits of the 1950s B-movie with whimsical British charm.

No, my account hasn't been hacked. No, I have not been bribed, well at least not directly, and no, I am not having hot monkey-sex with the creator. He lives in England, and I'm not able to travel.

The bribery thing is a bit weird. I got an Amazon shipment last week, and this book was in it. I didn't order it. It wasn't a separate shipment, but in the box with some other books. The one friend I had who sent me random books has disappeared from the Internet, so far as I know. Sweetienubbins blankly denied responsibility and has become a bit edgy again, so he's out.

Anyway, whyever I got the book here it is. And it's cute. I will say right up front that there is nothing about it that would make me put down twenty United States dollars of my own to procure it. But having read it in the half-hour that my dinner was baking (cauliflower, ricotta, parmesan, sausage, and pasta under parmesan/breadcrumb crust), I can think of many worse ways to wile away a spare moment.

It's like looking at storyboards, largely because of the conceit I suppose, but that realization enabled me not to roll my eyes and sigh gustily as the pages turned. The silliness is based in the Saturday sci-fi theater movies of my youth, the sheer awfulness of the plots and effects and acting even then apparent to me, the appeal being that the movies were...were...on my level somehow. The written sci fi I was gobbling up was ***far*** superior in execution and conception. But there were then, as there are now, moments when only the vapidity of TV will do.

This trifling entertainment fills exactly that slot, and offers an extra level of snickerdom with its in-jokes (eg, PineTREE Studios *heeheehee* and innumerable bad double entendres) and its aesthetic of taking the piss (Britishism, google it).

Speaking of which, the monster Grork is defeated by...no, that's a

Does anybody want it? I'll mail it to you. PM me.

This work is licensed under a Creative Commons Attribution-NonCommercial-ShareAlike 3.0 Unported License.
Posted by Richard at 6:30 PM