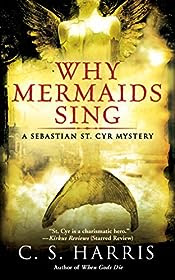 The Publisher Says: It's September 1811, and someone is killing the wealthy young sons of London's most prominent families. Partially butchered, with strange objects stuffed into their mouths, their bodies are found dumped in public places at dawn. When the grisly remains of Alfred, Lord Stanton's eldest son are discovered in the Old Palace Yard beside the House of Lords, the local magistrate turns to Sebastian St. Cyr, Viscount Devlin, for help.

Ranging from the gritty world of Thames-side docks to the luxurious drawing rooms of Mayfair, Sebastian finds himself confronting his most puzzling--and disturbing--case yet. With the help of his trusted allies--young servant Tom, Irish doctor Paul Gibson, and his lover Kat Boleyn--Sebastian struggles to decipher a cryptic set of clues that link the scion of a banking family to the son of a humble Kentish vicar. For as one killing follows another, Sebastian discovers he is confronting a murderer with both a method and a purpose to his ritualized killings, and that the key to it all may lie in the enigmatic stanzas of a haunting poem...and in a secret so dangerous that men are willing to sacrifice their own children to keep the truth from becoming known.

My Review: Book three keeps on going at a very high level

This series is a continuing pleasure, I'm thrilled to say. WHY MERMAIDS SING is one of the most disturbing books I've read in a long time, right up there with THE WASP FACTORY. The things that Harris has the killer do to these young men are truly scary. Even more disturbing to me is the who and the why of these violent violations of the young victims.

Harris has, as is standard in the series, made Regency London as real as anything in this room I'm writing in. The smells, the sights, the incredible inequality of income that assaults modern sensibilities. The characters, the veneers they wear, the stark contrast between their insides and outsides. It's a pleasure to read a good writer's strong writing and follow a plot that shows inventive ingenuity of a high order.

St Cyr is a terrific guide to London, as his ancestry (he's a viscount) opens doors that his disgrace (undeserved, I assure you) would otherwise close. That's as true down the social order as it is up. The fact that he ends this book with a rather new set of problems and issues, well...Harris...that is....

There aren't words...none that I know...for me to describe this entry's Big Reveal. It is truly a reveal, and "big" is a paltry small word for what goeth on here.

It makes perfect sense, in context, but it has a wallop that rocks my world.

Yeah. Make that two big reveals, each bigger than the last and holy maloley can I ever not wait for volume four to get here. NOW!!!!
Posted by Richard at 6:45 AM