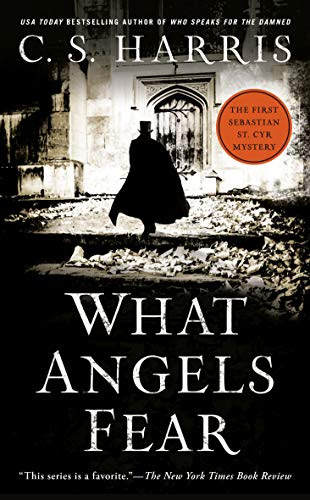 The Publisher Says: It's 1811, and the threat of revolution haunts the upper classes of King George III's England. Then a beautiful young woman is found raped and savagely murdered on the altar steps of an ancient church near Westminster Abbey. A dueling pistol discovered at the scene and the damning testimony of a witness both point to one man, Sebastian St. Cyr, Viscount Devlin, a brilliant young nobleman shattered by his experience in the Napoleonic Wars.

Now a fugitive running for his life, Sebastian calls upon his skill as an agent during the war to catch the killer and prove his own innocence. In the process, he accumulates a band of unlikely allies, including the enigmatic beauty Kat Boleyn, who broke Sebastian's heart years ago. In Sebastian's world of intrigue and espionage, nothing is as it seems, yet the truth may hold the key to the future of the British monarchy, as well as to Sebastian's own salvation....

My Review: BOOK ONE OF ADDICTIVE SERIES

It's amazing how involving I *still* find the Regency, even after many and various outrages perpetrated on its remnant mummy corpse. People with ultramod unprejudiced 'tudes bearing titles like Lord Shavingrazorden and the Duchess of Murkwatter,entertaining. People traveling to far points without seeming to spend the required months. I mean seriously, how did all those East Indiamen get to Fort Thingummy in Malaya in a twinkling? Ye Olde Concorde?

This book does its share of anachronism-perpetuating. Devlin, our hero, is a straight (in all senses)-ahead 21st century romance hero. Doesn't make him unappealing; it makes me a little impatient, I guess.

What makes this book so appealing to me is the atmosphere, the evocation of the London that one writer characterized as "...diamonds gleaming in the manure pile." Rich was better than poor by right; titles better than all the masses by right; royalty? Fuhgeddaboudit.

The characters around Devlin are all very clearly delineated, and several recur (no spoiler in that, since it's a series mystery) with evolving storylines that tie them into a unit in some unexpexcted and, honestly, some surprising and upsetting ways. Of course the female characters are single-emotion placeholders. I say of course because a first mystery usually has this minor and female character flaw, giving them shorter shrift than is advisable early on.

Withal the book is very worthy of your shelf space; the series is high quality reading; and the price of entry paltry compared to the pleasures you'll get.