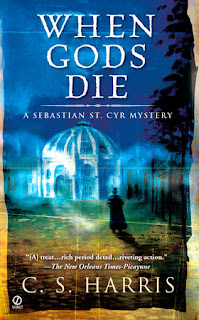 The Publisher Says: Brighton, England, 1811. The beautiful wife of an aging Marquis is found dead in the arms of the Prince Regent. Draped around her neck lies an ancient necklace with mythic origins-and mysterious ties to Sebastian St. Cyr, Viscount Devlin. Haunted by his past, Sebastian investigates both the Marchioness's death and his own possible connection to it-and discovers a complex pattern of lies and subterfuge. With the aid of his lover, Kat Boleyn, and a former street urchin now under his protection, Sebastian edges closer to the killer. And when one murder follows another, he confronts a conspiracy that threatens his own identity...and imperils the monarchy itself.

Don't tell me about how mean I am if you get hooked.

Second outing for author and sleuth. Some surprising twists in the pretty standard plot. More slightly annoying anachronisms, but they're completely forgotten because the author called George the Regent "Prinny."

I laughed until I stopped. What a name!

This book is a bit less romancey because the plot is driven by some fascinating political realities of the period. The biggest surprises are all personally relevant to sleuth Sebastian St Cyr/Devlin; some will fester, some will free him. It's a very emotionally charged book, moreso than the first, and it's just about as surprising as an author can make it be without spoilering her next book.

I think it's possible to read the books out of order, since the author is so careful to provide backstory as needed, and without the dreaded infodump feeling to it. I'd say it's very much worth your eyeblinks.
Posted by Richard at 4:05 AM