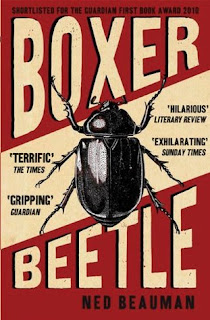 The Publisher Says: Kevin "Fishy" Broom has his nickname for a reason-a rare genetic condition that makes his sweat and other bodily excretions smell markedly like rotting fish. Consequently, he rarely ventures out of the London apartment where he deals online in Nazi memorabilia. But when Fishy stumbles upon a crime scene, he finds himself on the long-cold trail of a pair of small-time players in interwar British history. First, there's Philip Erskine, a fascist gentleman entomologist who dreams of breeding an indomitable beetle as tribute to Reich Chancellor Hitler's glory, all the while aspiring to arguably more sinister projects in human eugenics. And then there's Seth "Sinner" Roach, a homosexual Jewish boxer, nine-toed, runtish, brutish-but perfect in his way-who becomes an object of obsession for Erskine, professionally and most decidedly otherwise. What became of the boxer? What became of the beetle? And what will become of anyone who dares to unearth the answers?

First-time novelist Ned Beauman spins out a dazzling narrative across decades and continents, weaving his manic fiction through the back alleys of history. Boxer, Beetle is a remarkably assured, wildly enjoyable debut.

I read this after I'd gulped down The Teleportation Accident. Whatever Ned Beauman writes, he leavens with amusing dialogue and mildly incredible situations. I've heard his work characterized as science fiction. I think of that as a compliment, yet I'm not sure that label fits. It feels to me more as though Beauman has Anglicized the South American Magical Realism, shining the black light and the strobe light simultaneously on real situations, recognizable people, and commonplace locations, thereby revealing the bloodstains, the slug tracks, and the frightened faces of bystanders to the events unfurling before us.

This strange tale of fascists obsessed with Jewish sex objects is made much more fun by the modern-day frame around it. The Nazi-memorabilia thread made the whole story come together, as there was no missing the echoes of the insanity of the 1930s in modern times.

But to me the 4ft11in Sinner Roach (a piece of word-play that only makes sense in the book's context) steals the book. A boxer who makes more money from the men he fucks than he'd ever dreamed possible, goes to New York to fight the biggest fight of his career. If he can stay sober, he'll be in the big time. Well...Sinner is aptly named, let's say. His antics in New York and London are worth the book's cost. But the modern-day outcast, Sinner's echo, good-guy hacker/thief Fishy is just as amusing as he races around London in Sinner's long-ago wake to make his own big-time score. Where the two paths converge is a very moving moment. Considering Beauman's apparent dislike of sentimentality, it's also unusual.

I can't help but complain about one thing: The Philip Erskine Malaise. As soon as he takes over the narrative, he leaches the fun and slows the pace from the narrative. His wishy-washy mealy-mouthed scaredy-cat snobbery made me cringe, roll my eyes, and snort impatiently. Hence the 3/4-star deduction from the rating. Because this started out as a 5-star read, and should have stayed one. Don't cheat yourself, though, get the book on your TBR hillock somewhere near the top.
Posted by Richard at 6:22 PM