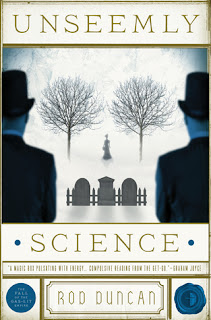 The Publisher Says: In the divided land of England, Elizabeth Barnabus has been living a double life - as both herself and as her brother, the private detective. Witnessing the hanging of Alice Carter, the false duchess, Elizabeth resolves to throw the Bullet Catcher’s Handbook into the fire, and forget her past. If only it were that easy!

There is a new charitable organisation in town, run by some highly respectable women. But something doesn’t feel right to Elizabeth. Perhaps it is time for her fictional brother to come out of retirement for one last case…? Her unstoppable curiosity leads her to a dark world of body-snatching, unseemly experimentation, politics and scandal. Never was it harder for a woman in a man’s world…

My Review: I really liked the first book in this series, THE BULLET-CATCHER'S DAUGHTER. But you knew that already, right? Since you read my reviews regularly, right?

We're going up a half-star on this second entry in the series because I really, REALLY liked it. There are some odd pleasures to be had in watching Virtue and Propriety subverted from within and with the collusion of the seemingly virtuous. Schadenfreude, anyone? This story takes Schadenfreude to new heights as Elizabeth must, reluctantly, solve a mystery for her bosom friend Julia; protect her nearest and dearest from several groups of malefactors that she doesn't know, as well as elude the vile Duke of Northampton's hired thugs trying to return her to his...service, to euphemize, for the vast sum of 400 guineas. So you know that we're on a rollercoaster as men, women, children of all ages and stations try to get their hooks into Elizabeth, driving her into reckless (though never careless) action.

As soon as Elizabeth believes she has a moment's breathing space, her coterie of enemies and friends set her spinning in yet another direction. One serious enemy, the International Patent Office, plays a smaller role in this book than the first entry; John Farthing the Patent Officer plays a surprising role, considering how they met.

As the story rockets along, shedding layers of illusion and bringing Elizabeth closer and closer to horrible and unpunishable crimes commited in the name of Seemly Science, the urge to sleep was banished and my meals became snack foods until the horrible, chilling denoument. It is Duncan's gift to take this unlikely point of departure and people it with characters whose existence comes to matter a lot to the reader. The world he has created is such an exuberant, lively, richly detailed place, and peopled with such wonderful people, and so much darned fun to enter, how can you resist running directly to the bookery of your choice and buying all three (yes, three!) volumes? Take my word for it, UNSEEMLY SCIENCE is an excellent investment in satisfying your story-hunger.
Posted by Richard at 3:03 PM