Welcome to the Chinese Corporate Chicago! ORPHANS by Ben Tanzer 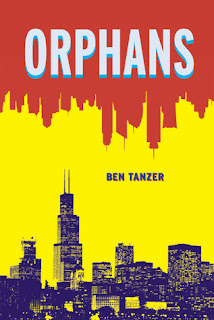 The Publisher Says: With Orphans, Ben Tanzer continues his ongoing literary survey of the 21st Century male psyche, yet does so with a newfound twist, contemporary themes set in a world that is anything but. In this dystopian tale of a future Chicago, workers are sent off to sell property on Mars to those who can afford to leave, leaving what’s left to those who have little choice but to make do with what’s left behind: burnt out neighborhoods, black helicopters policing the streets, flash mobs, the unemployed in their scruffy suits, robots taking the few jobs that remain, and clones who replace those workers who do find work so that a modicum of family stability can be maintained. It is a story about the impact of work on family. How work warps our best intentions. And how everything we think we know about ourselves looks different during a recession. This idea is writ large in the world of Orphans, where recession is all we know, work is only available to the lucky few, and this lucky few not only need to fear being replaced on the job, but in their homes and beds. It is also a story about drugs, surfing, punk music, lost youth, parenting, sex, pop culture as vernacular, and a conscious intersection of Death of a Salesman or Glengarry Glen Ross with The Martian Chronicles. Looking to the genre of science fiction has allowed Tanzer to produce something new and fresh, expanding both his literary horizons, and the potential market for his work. Tanzer also looks to the story of Bartleby the Scrivener with Orphans, and the question of what are we allowed as workers, and expected to be, or do, when work is fraught with desperation. Ultimately, Orphans is intended to be a contemporary story about manhood and what it means in today’s world, told from the perspective of work and family, and how any of us manage the parameters that family and work produce; but it’s a story told in a futuristic world, where our greatest fears are in fact already realized, because there isn’t enough of anything, and we are all too easily replaced.

My Review: Good gravy! That description of Orphans is pretty much what I planned to say in my review. I agree with all of it. The book is a small, rough diamond of Maleness, familiar to anyone who is approaching middle years or has passed through the horrors of middlescence into the Useless Years. I mean, I mean, GOLDEN years, GOLDEN of course haha. Tanzer's Norrin Radd (is that a 70s punk name or what?) is a father in deepest love with his child, Joey, and would do literally anything to feed, clothe, house, and protect him. His wife Shalla, although he is fixated on her presence, is not the focus of his world, nor he of hers. This is the inevitable pattern of family life, as parents struggle to figure out who they are in relation to birth families and work mates and the endlessly shifting sandbars in their home waters.

Norrin is a schlemiel, a perpetual underdog, not even beta in the pack hierarchy of maleness but more the omega. His escape is surfing Lake Michigan, renamed along with Chicago after a complete takeover of the country by a Chinese corporate hierarchy. The world hasn't really changed all that much from our own. Norrin would be begging for scraps and hustling to support his drug habit and his family in 2016 as well as this dystopic future. Norrin's love of surfing is telling: Speed is freedom, rushing along the surface of an illimitable deep gives him his only small mastery of the deeps in his life. It's all too short, and even Norrin seems to realize it's an illusion; after time on his sailboard, he sits with the wise man (humorously named Lebowski, as in "The Big") who treats him as a grown son. He's mildly impatient and endlessly willing to listen and advise. In short, he's a dad. Can't help but wonder whose dad...that'll make more sense after you've read the book, which I strongly suggest you do. After all, what other writer has the confidence to casually mention in passing that many places in and beyond the Solar System are inhabited?

Orphans is unjustly underknown. In spite of some copyediting irritations, eg "bare" for "bear" throughout the book, likewise "reign" for "rein" etc etc etc, the prose is vintage Tanzer. It is without gonfalons and ormolu cherubs or even pseudohip fake-slang, all of which date a book mighty soon after it appears. This is someone's subtle dystopia TV show (blessedly without zombies!)...maybe the Esquire Network? It could be filmed on the cheap in Detroit, and they need original programming...heck, why not Participant Media, those lovely lefties, as producers? I hate wastefulness, and that's what leaving Orphans on the shelf when it can be so much more is.

DISCLOSURE I am acquainted with Mr. Tanzer across several social-media sites. I did not solicit, nor did he or his publisher offer, a free copy to me. I paid retail like any other schlub.
Posted by Richard at 10:58 AM