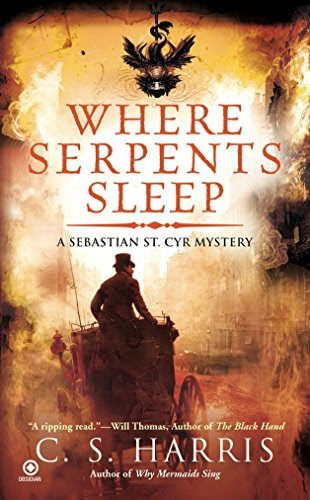 The Publisher Says: London, 1812. The brutal slaughter of eight young prostitutes in a house of refuge near Covent Garden leaves only one survivor- and one witness: Hero Jarvis, reform-minded daughter of the Prince Regent's cousin, Lord Jarvis. When the Machiavellian powerbroker quashes any official inquiry that might reveal his daughter's unorthodox presence, Hero launches an investigation of her own and turns to Sebastian St. Cyr, Viscount Devlin, for help.

Working in an uneasy alliance, Hero and Sebastian follow a trail of clues leading from the seedy brothels and docksides of London's East End to the Mayfair mansions of a noble family with dark secrets to hide. Risking both their lives and their reputations, the two must race against time to stop a killer whose ominous plot threatens to shake the nation to its very core.

My Review: ADDICTIVE SERIES ADVISORY!
As much incoherent gabbling as I did at the end of my review for WHY MERMAIDS SING, I had no way to know that Miss C.S. Harris had a nitro-fueled bullet-shaped moon rocket of a reveal in this book that would ratchet up the stakes for the entire series from here on.

It's a doozy, believe me, and it's also just too much fun and too exciting to imagine how book five will be handling this situation for you not to start NOW getting these books. The series is 11 books old now, I think, so we know we're not getting left in the lurch with no closure. (I hate that! It's why I only watch TV series on Prime, Netflix, and Acorn these days.)

As Sebastian is grieving the BIG Reveal from last book and the havoc it has wreaked on his mind, heart, and soul, he stops caring...or numbs it, anyway...about people in trouble, so stops investigating crimes. It takes his annoying Nemesis, Miss Hero Jarvis who is the daughter of England's most powerful man, to wake Sebastian up and bring out his sense of the rightness of spending his time righting wrongs for those otherwise too weak to expect help.

Miss Jarvis, meanwhile, is caught up in an obsessive need to discover the truth behind a series of murders that shake her to her core. In her efforts to make the world a better place, Hero has decided to research and write a bill to go before Parliament that will offer help to impoverished women, thus reducing the enormous supply of prostitutes in London. Speaking with these unfortunate women and girls, Hero finds herself learning more than is desirable for a gently born woman. But she found, and then watched murdered, a younger woman from exactly her class in a rehabilitation home for "soiled doves."

Hero's interest leads her to Sebastian, whom she has tangled with previously in the series. And so we're off to the races, the two frenemies careening around London one step ahead of their mysterious prey. As the sleuths don't know the why of the killings, they're powerless to stop more of them from occurring. As the clues mount up, they point to an unthinkable, horrifying motive that neither can believe could possibly be true...until the unprecedented event happens despite their efforts to warn of and even stop it.

But that is far from all there is to this tale. The original puzzle of the presence of a well-born woman in a home for fallen women has at its heart a revolting and heart-wrenching revelation. The young woman who died in Hero's arms was, in the final analysis, the most pitiable and unsaveable victim of them all. The revelation of the motive for the youngster to leave Society for a life of whoring causes both Hero and Sebastian a shock that will never leave them. The same would be true in the modern world, I promise you.

There is nothing more fun than watching an expert author, proficient in using her writing talent and marvelously, deeply involved in creating her settings and characters, blow them right out of their comfortable water in the scariest (to them) way possible.
Posted by Richard at 6:00 AM