Futures That Never Were: YOUR FLYING CAR AWAITS by Paul Milo 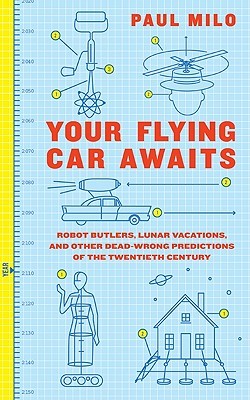 People have always imagined what life would be like in the future. Most of the time they've been wrong. Often they were really, really wrong. Your Flying Car Awaits looks at the most outrageous predictions from twentieth-century scientists, novelists, and social commentators, detailing the technologies and philosophies that led some great (and not so great)minds to think the ridiculous was achievable. Includes phenomenally inaccurate predictions such as:

An eye-opening, fascinating, and endlessly entertaining collection of truly boneheaded scientific predictions from the past hundred years, Your Flying Car Awaits shines an illuminating light on the people of the previous century by examining the ridiculous theories they envisioned about this one.

My Review: A fast-paced, entertaining overview of how Today was supposed to look. The author's narrative voice is conversational, so reading the book is like barstool/family room sofa beer-fueled chats with your best buddy.

In my youth, predating the author's by a decade or so, I loved finding the old issues of Popular Mechanix and the others of that stripe in my father's pack-rat piles or the library's musty old boxes. The illustrations on the covers...! Oh, and the headlines: "You Will Have Robot Slaves by 1965!" "First Moonbase by 1970!" "Mars is Ours!"

The future was such a cool place back then. I was looking forward to flying TWA to the Moon Marriott. I couldn't wait to board the Concorde, which I got to do one round trip in the 1990s...noisy damned thing. It was the closest I ever got to anything I saw in the magazines. The beautiful turbine cars! The personal copters!

But one thing I can truthfully say I'm delighted has not come to pass: Flying cars. Most people can't drive the ground cars they have with anything like expertise. Put 'em in charge of something heavy, unstable, and 500ft in the air...the mind boggles.

Another area of contention that was predicted to be a Wild West bonanza: designer babies whose genes were totally under the parents' control. It seems to be an area that makes all the atavistic need for control of our bodies go on Red Alert. Even though the possibility of ending most birth defects through gene therapy is on the horizon, in a world with anti-vaccine loopy goofs it seems likely that we'll be in for another round of silly, time-consuming arguments about "just because we can doesn't mean we should." *yawn*

All in all, reading this light essay on man's hubris in assuming he can predict the future was entertaining, enjoyable, and time I felt was well-spent.
Posted by Richard at 9:00 PM